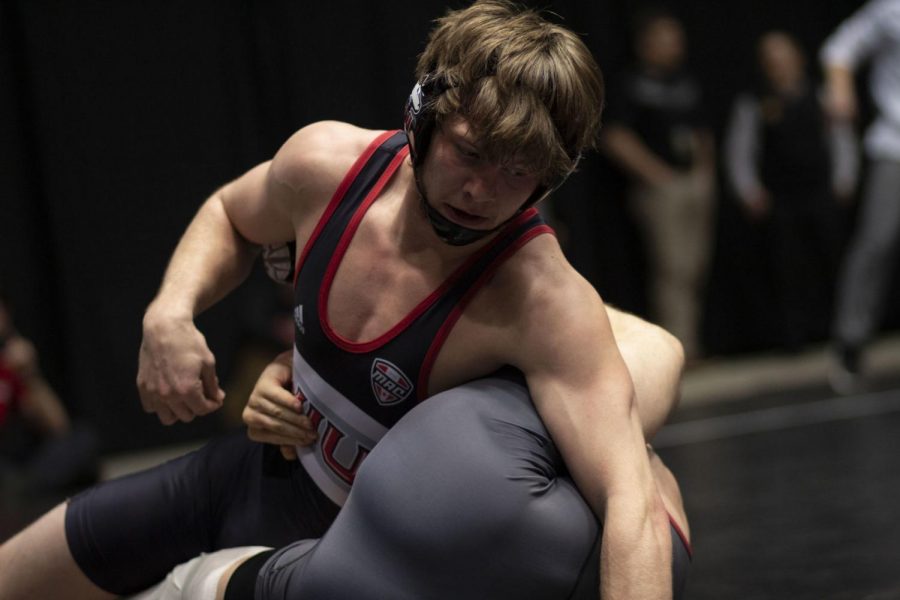 Then-redshirt sophomore Brit Wilson grapples with his opponent March 7, 2021 during his Semifinal match at the 2020 MAC Wrestling Championships at the NIU Convocation Center.

The Huskies took on Cal Poly first in a very lopsided matchup. The Huskies were only able to pick up two victories in the dual and lost the rest of the matches in very convincing fashion.

The two Huskie victories came from sophomore Michael Kaminski, who defeated Cal Poly freshman Abe Hinrichsen in a competitive tough matchup as the final score came down to the final seconds that ended with a score of 7-6. The other victory came from redshirt junior Anthony Gibson, defeating Cal Poly redshirt junior Brawley Lamer 10-4.

The Huskies responded to this defeat quickly against the Trojans, winning five of the first six matches. Redshirt senior Bryce West got the Huskies their first three points by defeating redshirt sophomore Jayden Carson of Little Rock 5-3 at 125 pounds.

Junior Javion Jones put up the next three points for the Huskies by winning 4-1 against Little Rock redshirt junior Conner Ward to give the Huskies the lead again at 6-3 after the Trojans had tied the score at 3-3.

Senior Anthony Cheloni then extended the Huskies lead to six to make the score 9-3 after winning his match 7-4 against Little Rock redshirt sophomore Joseph Bianchi.

The Huskies dominated from that point on, receiving points from forfeit. Redshirt junior Izzak Olejnik, senior Tristin Guaman, and redshirt senior Beit Wilson, recently making his return to the lineup, also picked up wins. The Huskies ended with a win 35-6 against the Trojans.

The wrestling team’s next match will be a dual against Mid-American Conference rival University of Buffalo at noon Saturday in Buffalo, New York.