University Of Arkansas At Fort Smith Given $18.7 Million By Windgate Foundation To Expand Nursing, Art Programs 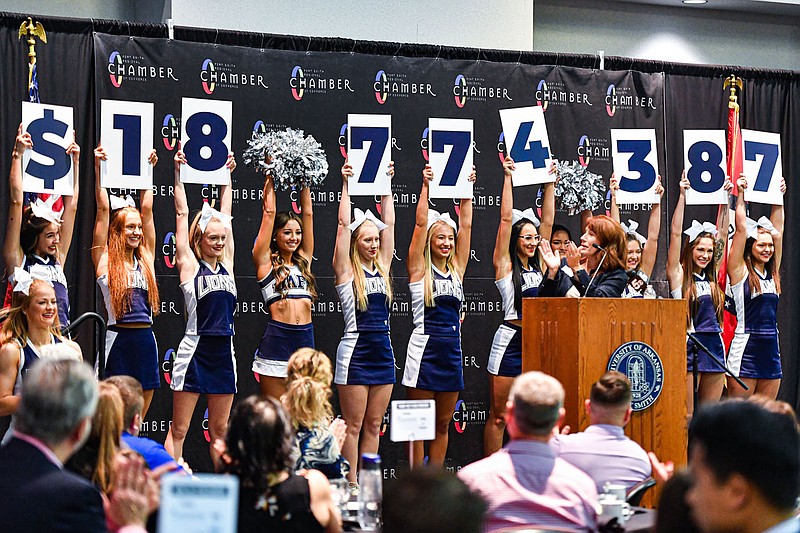 Dr. Terisa Riley (standing at podium), chancellor of the University of Arkansas-Fort Smith, announces with help from UAFS cheerleaders on Friday, Sept. 9, 2022, a gift of $18.77 million from the Windgate Foundation to the university at a First Friday Breakfast hosted by the Fort Smith Chamber of Commerce inside the Reynolds Room of the Smith-Pendergraft Campus Center at UAFS in Fort Smith. Riley said roughly $9.9 million of the donation will go toward an expansion of the universityâ€™s nursing program, with the remaining $8.8 million going toward an expansion of UAFS Windgate Art and Design. Visit nwaonline.com/220910Daily/ for today’s photo gallery. (NWA Democrat-Gazette/Hank Layton)

FORT SMITH — The University of Arkansas at Fort Smith announced Friday it would use the largest single gift it has received to expand its nursing and art and design programs.

Chancellor Terisa Riley told the crowd during the Fort Smith Regional Chamber of Commerce’s First Friday Breakfast the Little-Rock based Windgate Foundation gave the university more than $18.7 million for this purpose. The gift will allow the university to more than double the number of nurses the university graduates per year and expand its Windgate Art and Design building.

D. Antonio “Dean” Cantu, dean of the university’s College of Health, Education and Human Science, said the gift will allow UAFS to address a nursing shortage seen in hospitals in the River Valley, as well as across the country. Fort Smith is home to two major hospitals — Mercy Hospital and Baptist Health.

Paula Julian, executive director of the university’s School of Nursing, said based on conversations with local partners where students go to for their clinical learning experiences, the River Valley needs twice as many nurses as it has now.

“That’s how significant the shortage is in this community, so if you expand that to our region and beyond, as I said before, this is the biggest nursing shortage of our lifetime,” Julian said. “And we’re grateful that Windgate has invested in us and has given us the opportunity to produce more nurses to help with healing patients.”

Julian said the university has nearly 200 students in its nursing program, which is close to the number it had prior to the start of the covid-19 pandemic. It’s also starting to see increased interest in the program.

Katie Waugh, head of the university’s Art and Design department, said her program is growing as well. It has about 140 students.

Riley said more than $9.9 million of the $18.7 million donation will go toward expanding the nursing program through 2025. It will also allow the university to pay competitive salaries to nursing educators, among other things.

The gift is planned to be invested over two phases, according to a Friday news release from the university. The university will spend about $4 million at first to immediately hire 27 faculty members to expand both its traditional and accelerated bachelor of science in nursing programs to serve 198 more students per year. It will also spend a portion of the money to expand and equip new and existing simulation labs.

The second phase of this investment will allow UAFS to reinstate its associate degree of nursing and registered nurse to bachelor of science in nursing programs, the news release states. The university is set to hire 13 faculty for these programs to serve 100 more students annually should the programs be approved, bringing the total new employees to 40 and annual nursing graduates to 300.

Julian estimated the university’s associate degree of nursing sunset about 10 years ago. The registered nurse to bachelor of science in nursing program was stopped two years ago. However, the pandemic has demonstrated the need for nurses at all levels — from licensed practical nurses through baccalaureate and beyond, she said.

Cantu said the university is creating different pathways to try to meet prospective students where they are.

“So by bringing back the ADN program, that allows us to have an opportunity or a pathway for those that want to pursue that degree, the associate’s degree, or also those that have the LPN and want to complete their RN through that pathway,” Cantu said. “Likewise, with bringing back the RN to the BSN, it creates another pathway that meets those individuals who have the RN but want to complete a baccalaureate degree; it meets them where they’re at in their career pathway.”

Outside the nursing program, Riley said UAFS will use more than $8.8 million from the Windgate Foundation to build a 19,876-square-foot addition to its Windgate Art & Design building.

This project, which will begin in 2023, will coincide with the broadening of existing courses, as well as the addition of new ones, that will expand what UAFS has to offer students in the field of art and design, the news release states. It will include a woodshop and ceramics studio, a digital fabrications suite, a book arts center, and additional classroom, office and studio spaces. It will also have expanded space to support art history and museum programs and papermaking.

Riley said the newly expanded Windgate building will feature a “more obvious” entrance on its south side as well to welcome visitors to its art gallery and events that will be held there.

Waugh said the larger facility is tentatively set to be fully available in 2024.

Thomas Saccente can be reached by email at [email protected] 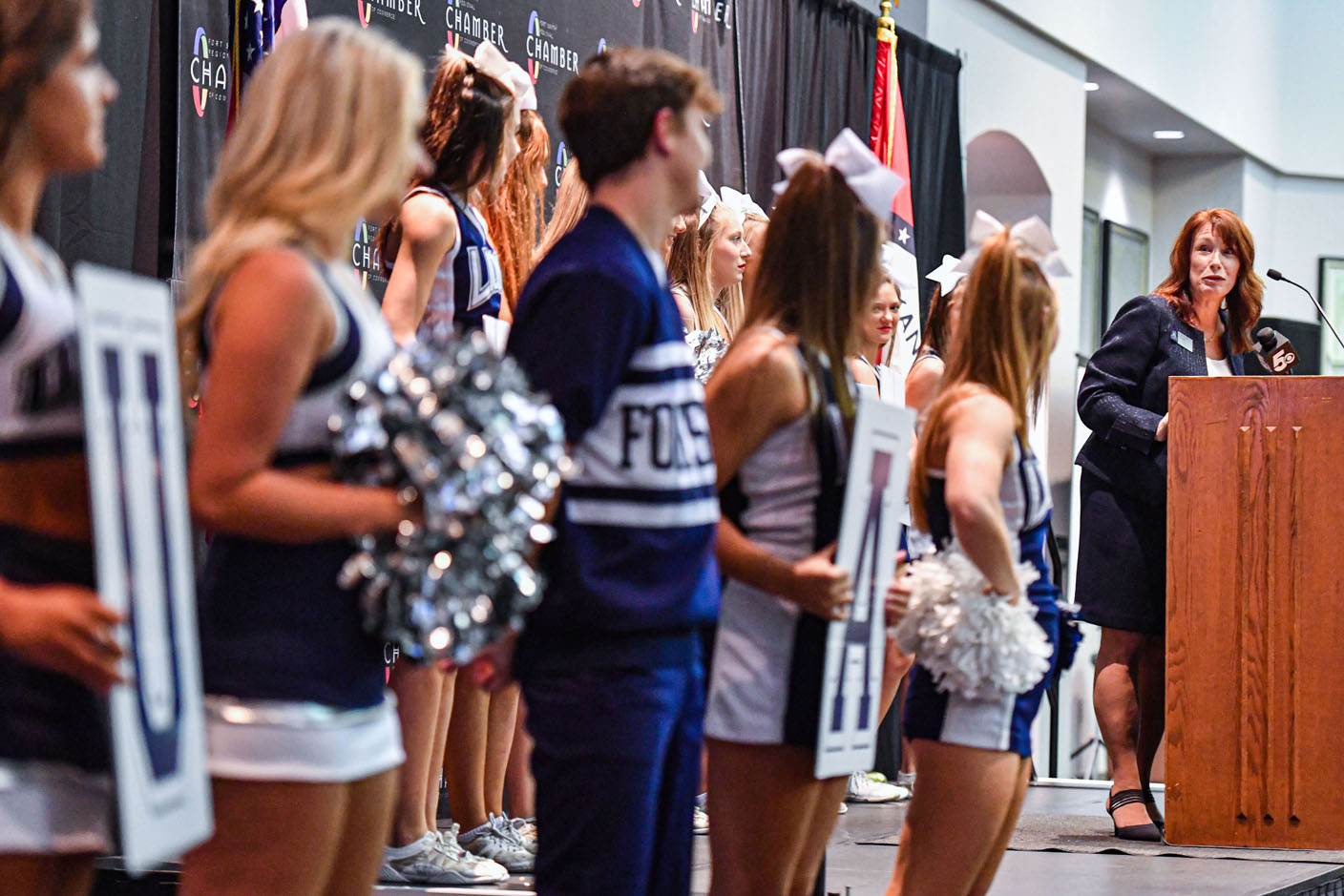 Dr. Terisa Riley (right), chancellor of the University of Arkansas-Fort Smith, announces with help from UAFS cheerleaders on Friday, Sept. 9, 2022, a gift of $18.77 million from the Windgate Foundation to the university at a First Friday Breakfast hosted by the Fort Smith Chamber of Commerce inside the Reynolds Room of the Smith-Pendergraft Campus Center at UAFS in Fort Smith. Riley said roughly $9.9 million of the donation will go toward an expansion of the universityâ€™s nursing program, with the remaining $8.8 million going toward an expansion of UAFS Windgate Art and Design. Visit nwaonline.com/220910Daily/ for today’s photo gallery. (NWA Democrat-Gazette/Hank Layton) 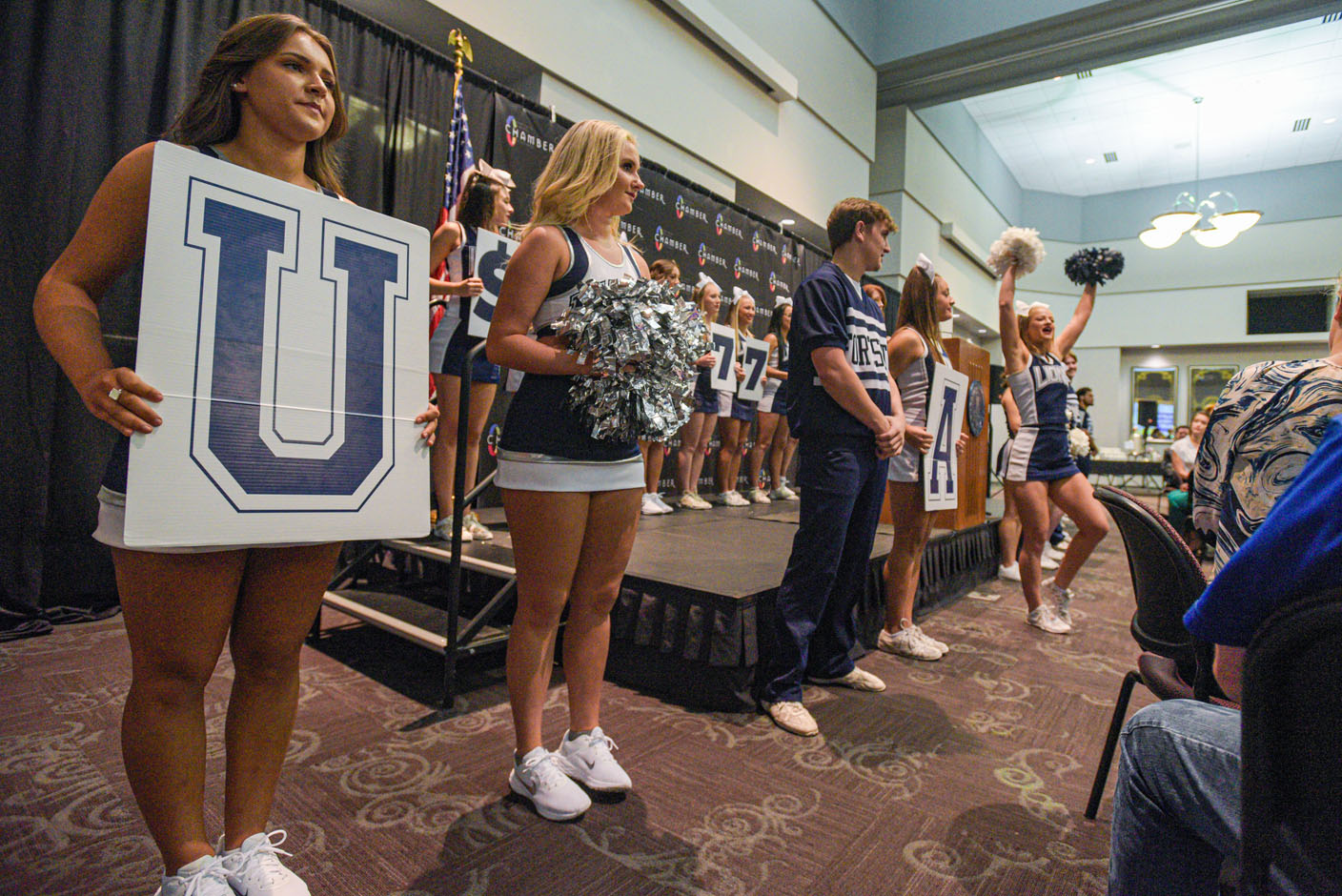 Cheerleaders for the University of Arkansas-Fort Smith perform on Friday, Sept. 9, 2022, as Dr. Terisa Riley, chancellor of the university, announces with help a gift of $18.77 million from the Windgate Foundation to UAFS at a First Friday Breakfast hosted by the Fort Smith Chamber of Commerce inside the Reynolds Room of the Smith-Pendergraft Campus Center at UAFS in Fort Smith. Riley said roughly $9.9 million of the donation will go toward an expansion of the universityâ€™s nursing program, with the remaining $8.8 million going toward an expansion of UAFS Windgate Art and Design. Visit nwaonline.com/220910Daily/ for today’s photo gallery. (NWA Democrat-Gazette/Hank Layton)

The Windgate Foundation has awarded more than $25 million to the University of Arkansas at Fort Smith to support its Windgate Art and Design building and endowment in the past, in addition to visual arts and design programming and a comprehensive scholarship endowment for high-need students.