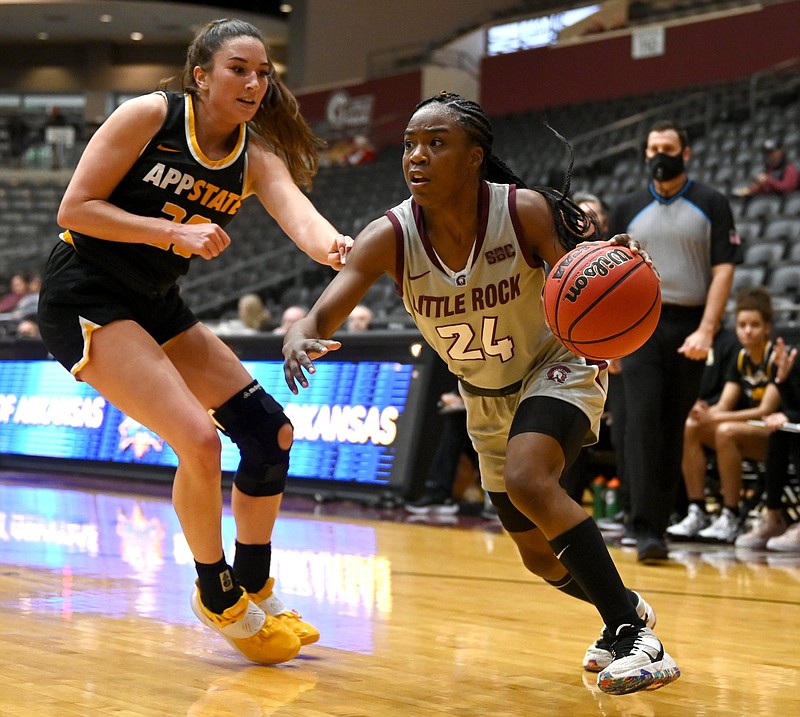 UALR’s Mayra Caicedo (24)has been a spark for the Trojans this season, helping to lead on both sides of the ball. The senior point guard is one of five UALR players who played last season who is also a part of the rotation this season. (Arkansas Democrat-Gazette/Stephen Swofford)

All 5 feet, 3 inches of Mayra Caicedo poked her head between Tia Harvey and Angelique Francis’ shoulders during an interview with a reporter.

“No, it’s not for you,” Francis said, shooing Caicedo away.

That adjective came after “goofy, energetic and fun” — all much more apt descriptors of the University of Arkansas-Little Rock point guard.

But there is no better word to illustrate what Caicedo has meant to the Trojans over the past two seasons than consistent.

Through significant roster turnover, an unusual 2020-21 campaign and a month-long pause this season, Caicedo has been ubiquitous. And while the point guard who has started all but one of UALR’s past 35 games holds one more year of eligibility, Caicedo could be playing her final two games at Little Rock’s Jack Stephens Center — today versus Arkansas State University and Monday against Champion Christian College.

“I feel like I’m the base when I’m in the game,” Caicedo said. “They listen to me — not every time but most of the time — when I’m trying to tell them where to go.”

The point guard as an extension of the coach is cliched. The Trojans have needed it more than ever this season.

Caicedo is one of five UALR players who played last year who is also a part of the rotation this season. One of them, Krystan Vornes, has been injured and may not return.

The other three — Harvey, Francis and Dariel Johnson — have grown around someone they all call the “heartbeat” of their team.

“She makes you want to give your all, seeing her go as hard as she does,” Harvey added.

Since coming to Little Rock as a junior college transfer before last season, Caicedo has scored in all but four games. She’s also had at least three assists in all but three games.

And while her numbers in that category are slightly down this season — Caicedo still is among the top 40 at 5.1 assists per game — her points per game average has bumped up from 5.8 to 6.6.

That’s on top of directing the Trojans on defense, as they’re on pace to hold opponents under 58 points per game for a second straight season.

It wasn’t a given everything would fall into place.

Fours years in, it couldn’t have gone much better. And that fast, it could be all over, too.

“When I was in New Mexico and done with the two years there, I was like, ‘Oh my gosh, I’ve already spent two years in the United States,’ ” Caicedo said. “I was not thinking about coming to the United States at first … and now four years, it’s like, ‘Wow, I’ve really been here.’ “

Caicedo had never been to the U.S. before. She didn’t know English when she arrived. All her family was back home in South America.

As she describes it, she “was blind.”

Now? She sees everything.

During a pause in practice, the diminutive point guard is the loudest voice in the gym, calling out directions nearly to the point of yelling at her teammates.

It’s rarely flashy — outside of the school-record 17 assists she had in a game last January against Louisiana-Monroe.

“It’s been a beautiful thing,” Francis said. “We heard [about her] coming in and we always knew that she would be great. … It’s not a surprise to us.”

CHALK TALK UALR has won 17 straight home games against ASU and the Trojans have never lost to the Red Wolves inside the Jack Stephens Center. … ASU has two Little Rock natives on its roster in Lauryn Pendleton (LR Central) and Morgan Wallace (Pulaski Academy). … UALR enters the weekend tied with Appalachian State for fourth place in the Sun Belt Conference standings. The league’s top four seeds will earn a bye in next month’s conference tournament.