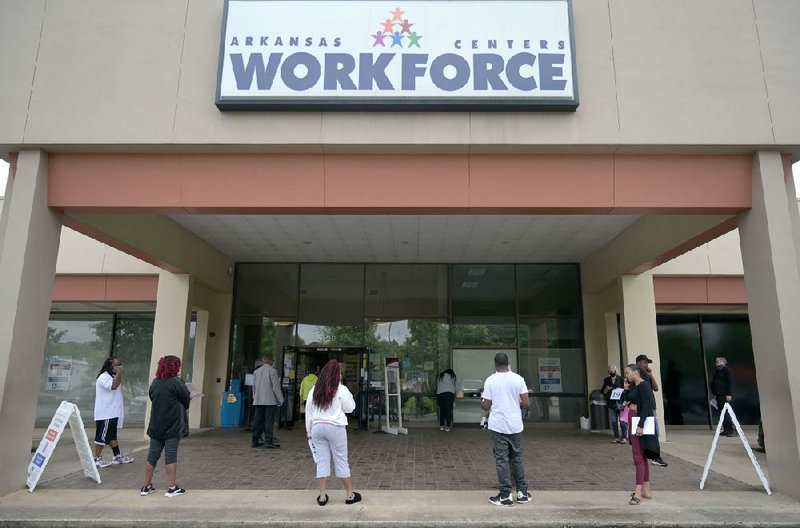 People wait in line to file for unemployment Friday, May 22, 2020, at the Little Rock office of the state Division of Workforce Services. (Arkansas Democrat-Gazette/Stephen Swofford)

Unemployment in Arkansas increased by one-tenth of a percentage point in August, rising for the second consecutive month, to 3.4% while remaining just below the U.S. rate of 3.7%.

Five major industry sectors added workers, boosted by a 3,800 increase in government jobs as teachers and support staff returned to the classroom.

Preston highlighted the year-over-year job improvements across most industry sectors. “We still have more than 28,000 Arkansans employed today,” he said. “There’s progress from [where] we were in last year.”

Another key metric, the state’s labor force, dropped by 1,628. Year-over-year, the labor pool is up 0.4% to 56.8%, still about five points lower than the national average.

“That’s the big hurdle,” Preston said of the labor force decline in August. “If we could just get ourselves up to the national average that would fill at least 70,000 to 80,000 jobs we have open in our state.”

The downward shift in the number of employed to 2,648 was the first monthly decline since December, according to Michael Pakko, chief state economist with the Arkansas Economic Development Institute at the University of Arkansas at Little Rock.

However, the change is not alarming, Pakko said Friday. “Basically there was seven months of growth and one month of mild decline,” he added. “One month doesn’t bother me; that stuff happens all the time. One month different in itself is not meaningful.”

Leisure and hospitality achieved significant job gains year-over-year, Pakko said, with the sector adding 7,300 jobs across all subsectors, including accommodation and food services and arts, entertainment and recreation.

“It’s good that we’re seeing continued recovery in the leisure and hospitality sector,” Pakko said. “That was one of the hardest hit areas 2½ years ago and it’s still not all the way back to where it was before the pandemic. We had a really strong month and generally it’s coming back pretty good.”

“Manufacturing is an area that continues to be strong for Arkansas,” Preston said.

“Because of supply chain issues, a lot of companies are looking domestically more for production needs as opposed to waiting for it to come from China,” Preston said. “We’ve benefited from that.”

Graphs and information about the Arkansas and U.S. joblessness rates.

Posted 10/1/22 LITTLE ROCK — Arkansas Attorney General Leslie Rutledge today announced a lawsuit against President Joe Biden, Secretary of Education Miguel Cardona and the U.S. Department of Education for … This item is available in full to subscribers. Attention subscribers We have recently launched a new and improved website....