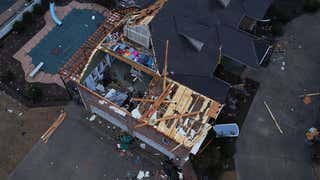 A severe weather outbreak is marching across the South and is expected to bring dangerous storms to several states Wednesday into Thursday.

Here’s a look at the latest news from this outbreak:

More than 44,000 homes and businesses are without power in Mississippi, according to PowerOutage.us. Most are in the western part of the state where damage was reported in several areas.

Kentucky is reporting about 9,200 outages.

While at least one tornado hit Jackson, Mississippi, storm impacts were also reported in Jackson, Tennessee. Photos showed damage to some buildings and street signs.

There were numerous reports of trees down and the hospital there was running on backup power.

The town is located along Interstate 40 between Memphis and Nashville.

Sirens blared across parts of Jackson, Mississippi, as at least one tornado moved through around 4:45 p.m. local time.

First responders are still assessing some areas, but a dispatcher for Hinds County, where Jackson is located, told weather.com on the phone that there were no immediate reports of major damage or injuries.

“We have some damage in downtown Jackson,” the dispatcher said. “Mainly just power lines down, power poles, transformers.”

There was a report of some roof damage and a tree down on a building.

Storm-related power outages are being reported across several staets, including more than 61,000 in Louisiana, according to PowerOutage.us.

Reports of storm damage are coming in from Louisiana. They include:

-Signficant structural damage, including to a home in Sabine Parish, about 55 miles south of Shreveport.

-A large tree through a structure in Hodge, about 62 miles southeast of Shreveport.

-Materials stripped off the roof of a business, also in Hodge.

At least two counties, Washington and Franklin, have announced that classes are canceled for Thursday.

Out of an abundance of caution, Superintendent Steve Lanier, and school officials have canceled school for tomorrow due to an approaching storm,” a message from Franklin County said. “We will continue to monitor it and keep you all updated, but as of now, we anticipate everyone returning to school on Friday.”

Some 61,000 power outages are being reported in Louisiana, according to PowerOutage.us. The bulk of the outages stretch across about 17 parishes in the western and central parts of the state.

More than 15,000 outages are being reported in Mississippi and about 5,700 in Arkansas.

Each outage represents one account with the power company, but could affect many more people.

Service was suspended on some ferry routes in New Orleans ahead of the weather, including Algiers Point – Canal Street and Chalmette. Streetcar service is also shut down.

Soldiers and other personnel at Ft. Polk, near the town of DeRidder about 50 miles north of Lake Charles, were told to seek shelter as a tornado warning was issued about an hour ago.

“Move to an interior room on the lowest floor of a sturdy building,” an alert on the base’s Twitter feed said. “Avoid windows. If in a mobile home, a vehicle, or outdoors, move to the closest substantial shelter and protect yourself from flying debris.”

An all-clear has since been issued.

About 44,000 power outages are being reported in Louisiana, according to PowerOutage.us. The bulk of the outages match up with a line of severe storms slicing across a large swath of the state.

(1:53 p.m. EDT) Officials Warn of Bad Day Ahead in Mississippi

Shelters are opening in parts of Mississippi as residents are told to stay vigilant.

“Today’s weather may not impact some folks while others may experience one of the worst days of their life,” Stephen McCraney, executive director of the Mississippi Emergency Management Agency, said in a briefing, according to The Associated Press.

Several school districts across the South were sending kids home early or switching to remote classes Wednesday due to the severe weather. According to the AP, the early dismissals and remote learning included Memphis schools and dozens of Mississippi districts.

The University of Alabama also said it would suspend campus operations at 4 p.m. CDT.

Local police confirmed to The Weather Channel that seven people were injured in Springdale as the severe storms hit the city. Two of those injuries were critical. No other information on the status of the injured was immediately available.

Fast-developing tornadoes within a line of severe storms can be especially dangerous because there may be little lead time. This heightens the need to act quickly on a tornado or severe thunderstorm warning when it’s issued.

A short line of thunderstorms intensified as it moved into northwest Arkansas about 30 minutes before striking Springdale. It prompted the National Weather Service to issue a severe thunderstorm warning for the area at 4:03 a.m. CDT. The line of storms reached peak intensity right over the Fayetteville to Springdale corridor around 4:09 a.m.

A tornado watch was also in effect for northwest Arkansas until 7:00 a.m.

While it isn’t yet known if the damage in Springdale was caused by a tornado, it would fit the description of quasi-linear convective system (QLCS) tornadoes, which sometimes don’t come with extended warning lead time because they spin up quickly.

For more on the dangers of QLCS tornadoes, watch this video.

In a statement to weather.com, the Springdale School District confirmed heavy damage to George Elementary School:

“At this time we can confirm George Elementary School in Springdale, Arkansas, was damaged by a potential tornado in the early morning of Wednesday, March 30,” the statement read. “The gymnasium was destroyed and the kitchen and cafeteria were severely damaged. The school district is closed today. Maintenance staff are assessing damage in all buildings throughout the Springdale School District.”

With more than 23,000 students, the Springdale School District is the largest in the state of Arkansas.

Arkansas’ fourth-largest city sustained damage from a predawn storm Wednesday morning, but no injuries were immediately reported, according to the AP.

The damage in Springdale was illuminated by the lights of first responder vehicles and flashlights as people went into the damaged structures to search for victims. Some of the worst damage appeared to be to the Nilfisk office building, just south of the downtown area along Robinson Avenue.

Southwest of the Nilfisk office, the George Elementary School gymnasium was destroyed.

Homes were damaged and vehicles flipped when a tornado-warned storm swept through the northwest Missouri town of St. Joseph Tuesday night. Nobody was injured, St. Joseph Police told KSHB.com. A survey team from the NWS confirmed Wednesday morning that the damage was caused by an EF1 tornado.

The Weather Company’s primary journalistic mission is to report on breaking weather news, the environment and the importance of science to our lives. This story does not necessarily represent the position of our parent company, IBM.