RICK ON THE ROAD: Rivalry Born In Bentonville When West Came To Play 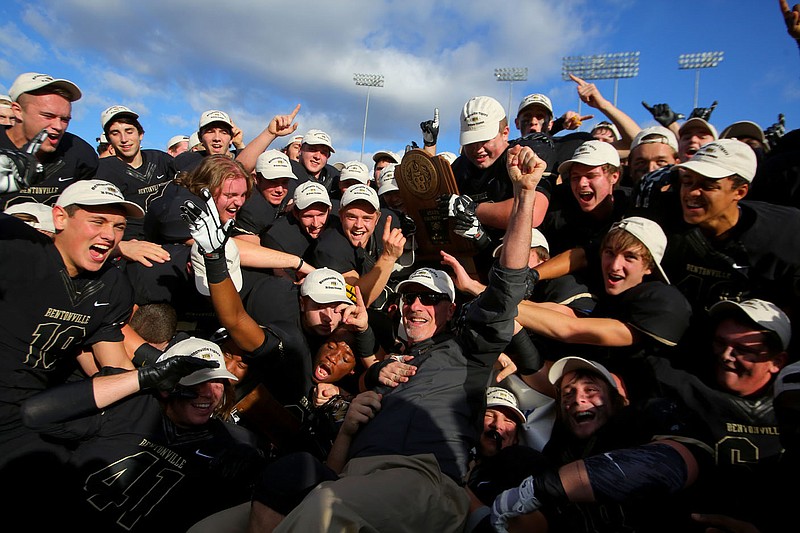 BENTONVILLE — Not in our house.

That was the message from Bentonville High to Bentonville West when the teams met to decide the 7A-West Conference championship in 2017.

Bentonville had already established itself as a top football program under Coach Barry Lunney Sr., who retired in January 2015 after leading the Tigers to a string of conference championships and four of their five state titles. But Bentonville’s standing as a football town soared on the night of Nov. 3, 2017, in a showdown between the established Tigers of Bentonville High and the newcomers from Bentonville West. West was 9-0 at the time, and the Wolverines had the advantage of being declared the home team at Tiger Stadium because their facility in Centerton had not yet been built.

It was Bizzaro World that night, akin to a segment in the Superman comics where up was down, down was up, and the planet spun backward. West fans sat on the home side at Tiger Stadium while Bentonville High fans were moved to the east side that included portable bleachers that were brought in to accommodate an overflow crowd. West honored its seniors before the game, and Bentonville High fans watched a long procession of students and parents walk onto the field and leave under an arch lined with balloons of the West school colors.

Bentonville’s players were also supposed to dress in the visitors’ locker room that night. But the Tigers blew that plan up when they changed from street clothes at an elementary school down the street and roared off the bus and onto the field in full gear from the visitors’ side of the stadium.

The atmosphere was absolutely electric for the fans, coaches and, especially, the players.

“Our coaches were pretty ticked off we were the away team in our own stadium,” said Preston Crawford, a former all-state running back for Bentonville. “When we got off the bus and saw the crowd, it was like chills went through my skin and, probably everybody else’s skin, too. The game was exciting, by far the best high school game I ever played in.”

Bentonville won 37-28, which earned the Tigers the conference championship and a No. 1 seed for the Class 7A state playoffs in 2017. Bentonville students rushed to celebrate on the field with the players, including senior Dwight Crawford, who sprinted around with his hands clasped firmly on a large Bentonville Tigers flag.

“I wanted to chase him around, but I was too tired,” Preston said of his older brother. “He was a senior that year playing in his last high school football game before the playoffs, so I was really happy for him.”

Normalcy returned in 2018 with the completion of a $3.7 million football stadium for Bentonville West with seating for more than 4,000 fans and a two-story press box. “Claws Up” is the battle cry for the Wolverines, who’ve yet to beat the Tigers in football.

Bentonville West will get another chance on Nov. 4 at Tiger Stadium to end 7A-West Conference play.

“The addition of the Bentonville West Wolverines had a great impact on football in Benton County,” Bentonville Athletic Director Scott Passmore said. “The program opened up with immediate success. The success of Bentonville West has helped create one of the best Friday night rival games in football.”

Bentonville, of course, is home to Walmart, a multinational corporation that sparked the tremendous population growth in Northwest Arkansas, which now totals more than 560,000, according to data collected for the 2020 census. The city is a mixture of old and the new, where the original Bentonville High School built in the 1920s in the Spanish colonial style stands quietly on Second Street just minutes from a bustling downtown square that includes businesses, government buildings and, of course, Walton’s 5&10, a museum and gift shop that traces what Walmart founder Sam Walton started.

There are loads of trendy new restaurants from which to choose but there’s also the old standards like Glasgow’s, the oldest Mexican restaurant in Benton County that looks much like it did when it opened in the 1960s. Much has changed in Bentonville since then, including the Crystal Bridges Museum of American Art that draws thousands of visitors each year and an annual film festival founded by actress Geena Davis.

But on Friday nights during the fall, high school football takes center stage with Bentonville West and Bentonville High, which won its first state championship in football under then-coach Gary Wear in 2001. That rise to the top earned the Tigers statewide respect they hadn’t had before.

As its population grew, Bentonville invested more in its public schools toward classrooms and facilities and hired Lunney from Fort Smith Southside in 2005 to head its football program. The move paid off big time with Lunney leading the Tigers to four state championships starting in 2008. Bentonville’s 24-21 state championship victory over Fayetteville in 2014 capped a 10-year tenure at the school for Lunney, whose teams compiled a 97-25 overall record and a 59-11 mark in 7A-West Conference play during that time. Under his guidance, the Tigers also won or shared eight consecutive 7A-West titles, and built a 33-game conference win streak from 2009-13.

“Coach Lunney earned the respect of the entire sports community and elevated the [Bentonville] program to one of the best in the state of Arkansas, with national recognition as well,” Passmore said. “One of Coach Lunney’s greatest strengths was the ability to surround himself with great people. He was a magnet for success, and others wanted to be a part of this success. A strong faith, work ethic, discipline, respect and trust were all characteristics of his programs.”

With the Lunney era concluded, Jody Grant at Bentonville and Bryan Pratt at Bentonville West are established head coaches with similar goals: To win championships and continue to build on what most, but not all, consider one of the best rivalries in Northwest Arkansas.

“You’ve got to win to be considered a rivalry,” Preston Crawford said, “and they haven’t beaten us yet.” 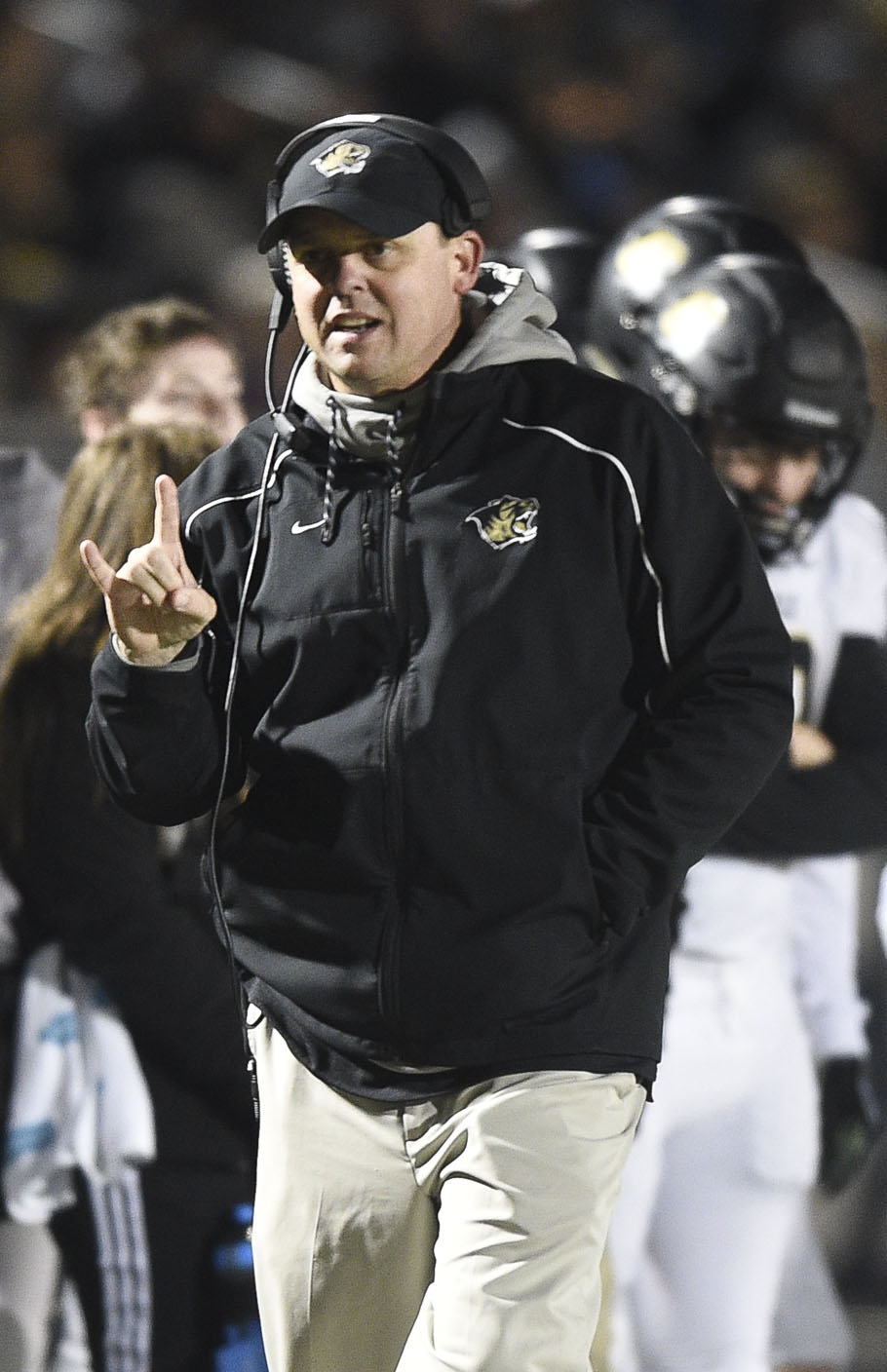 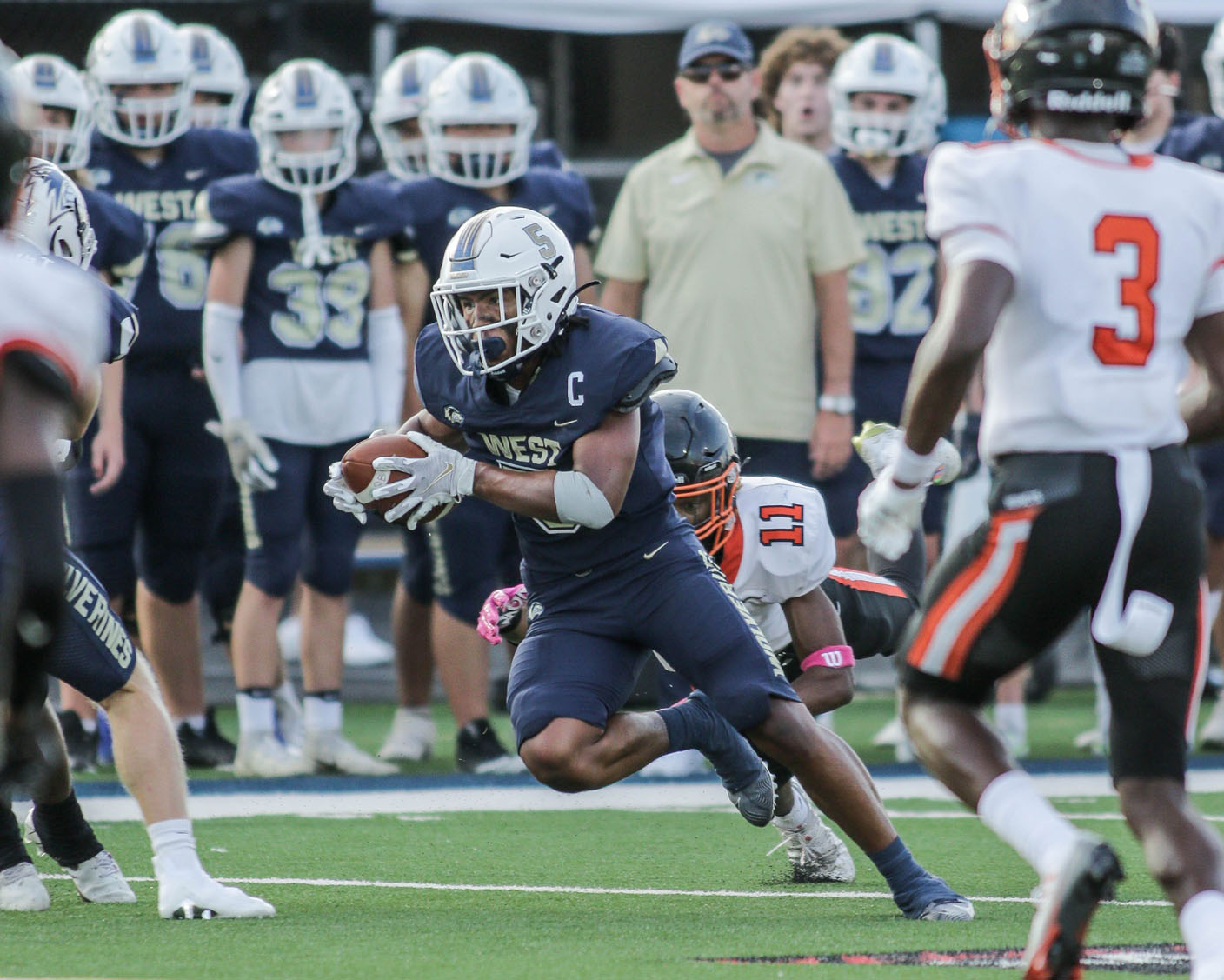 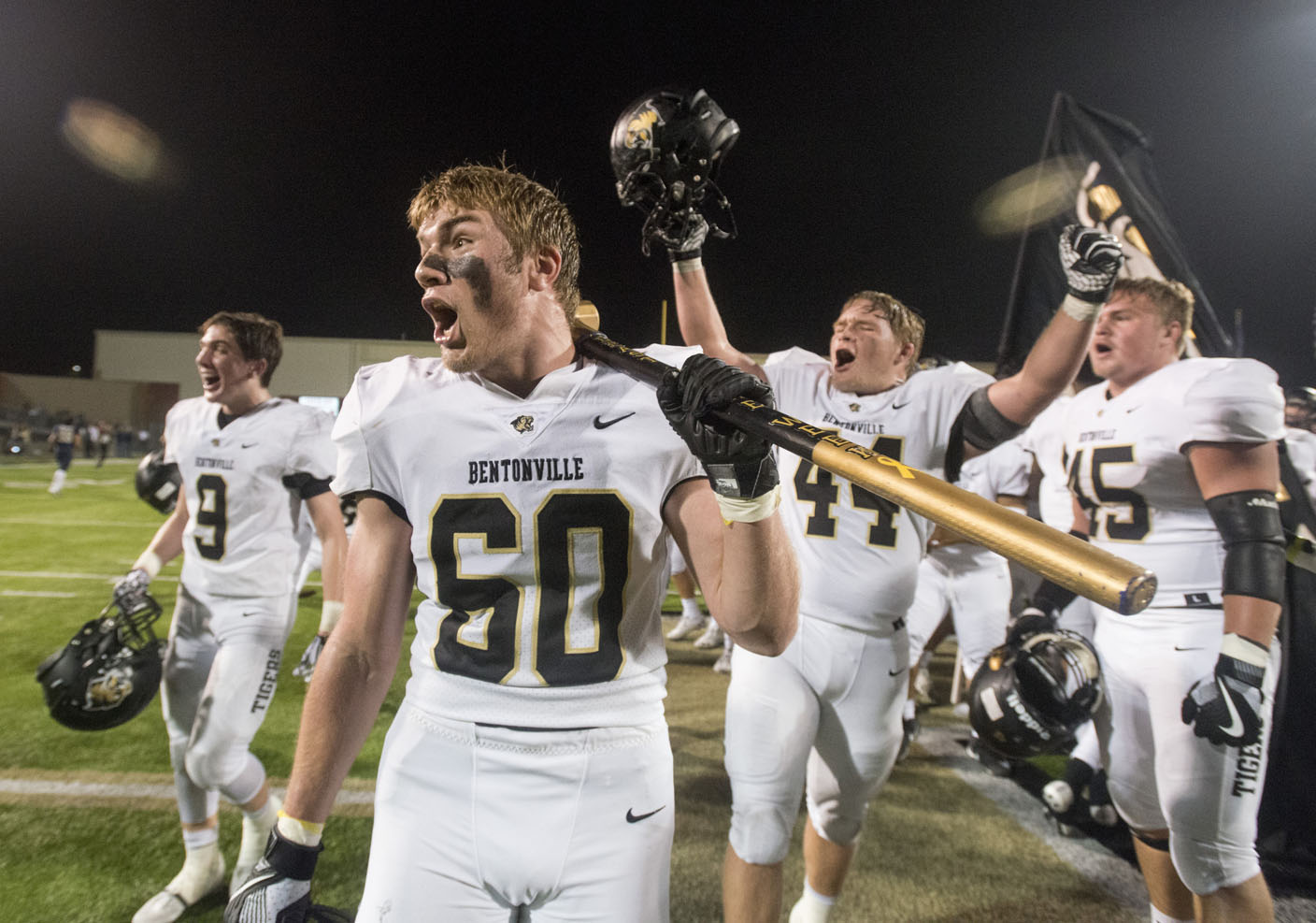 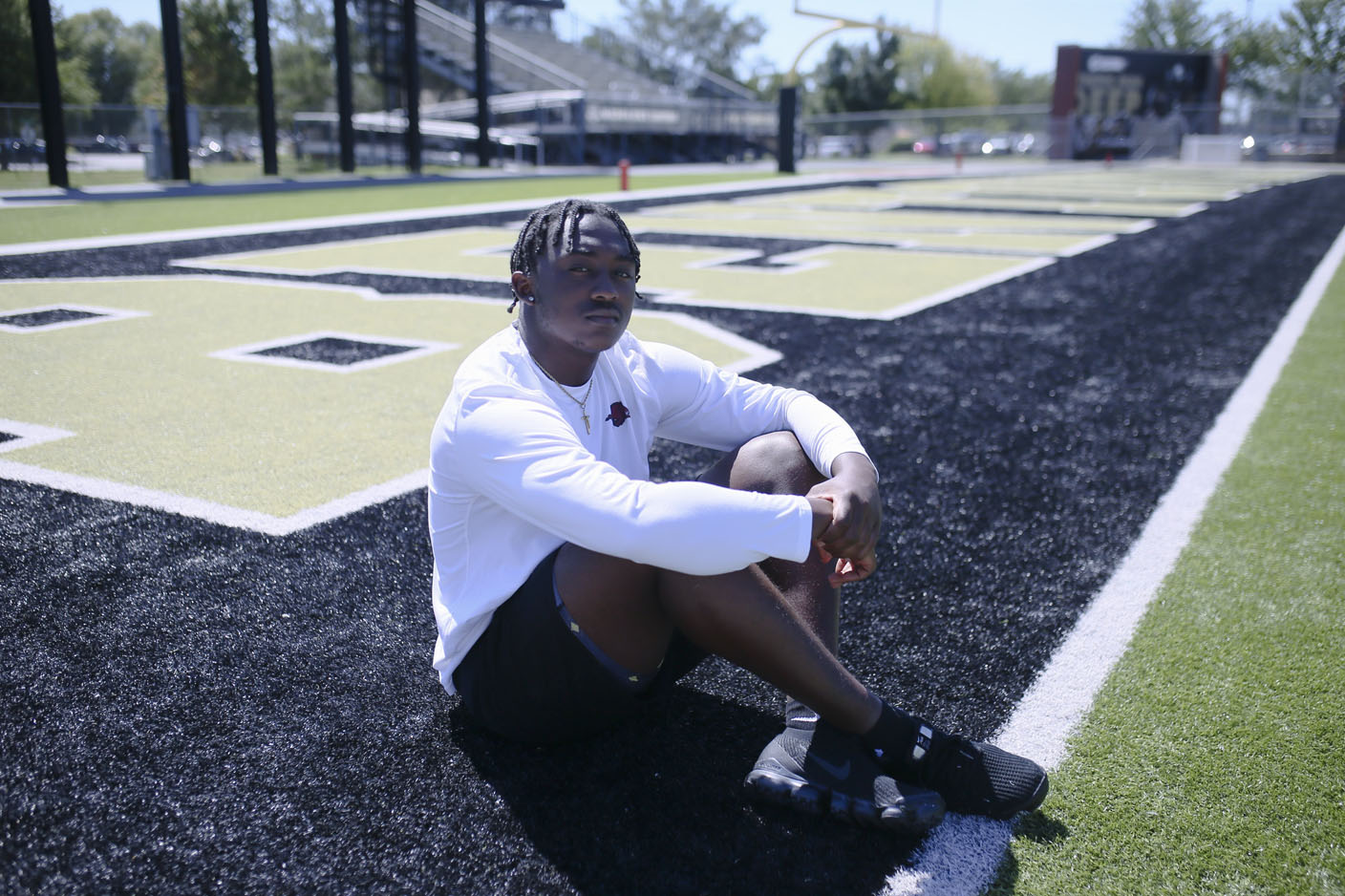 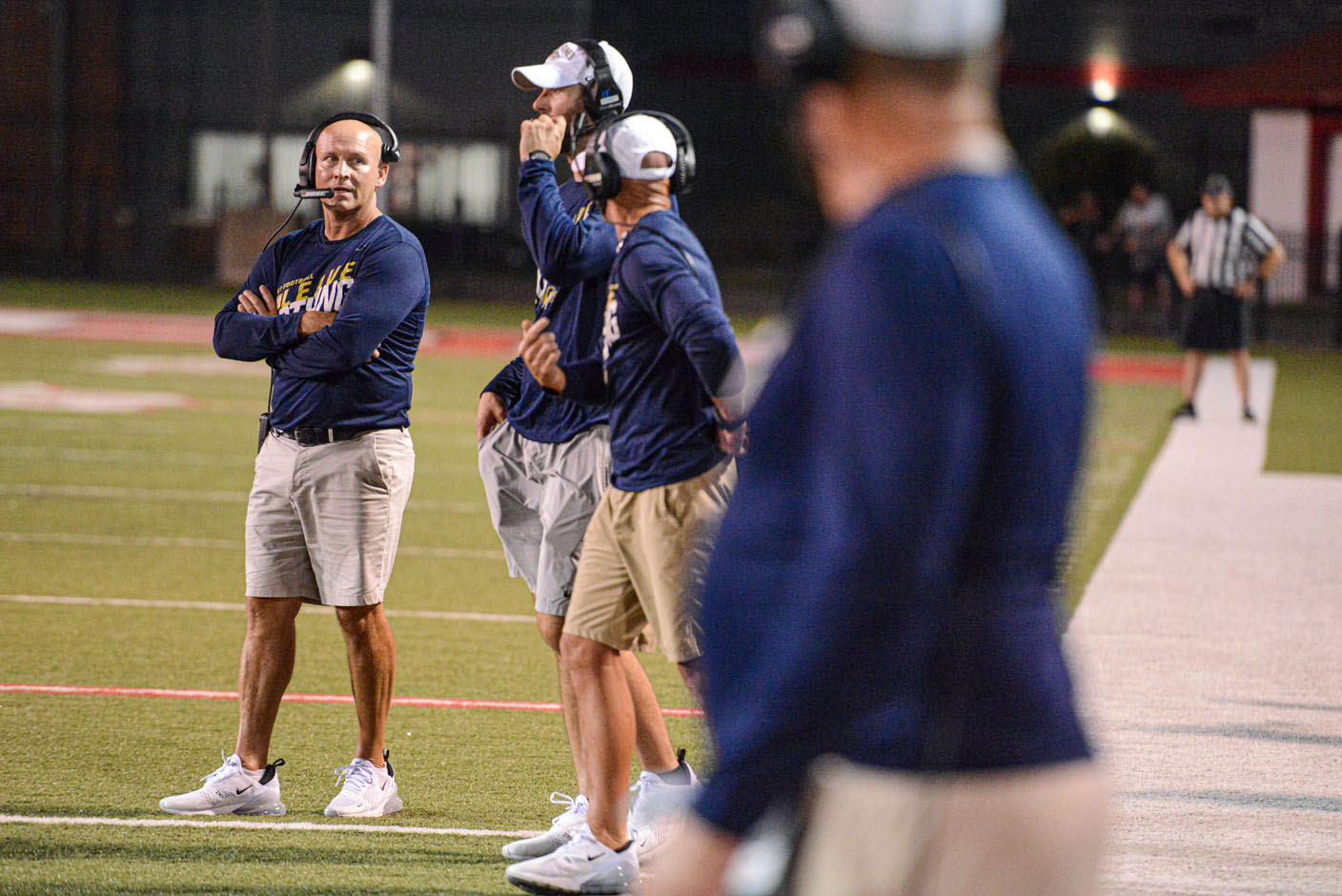 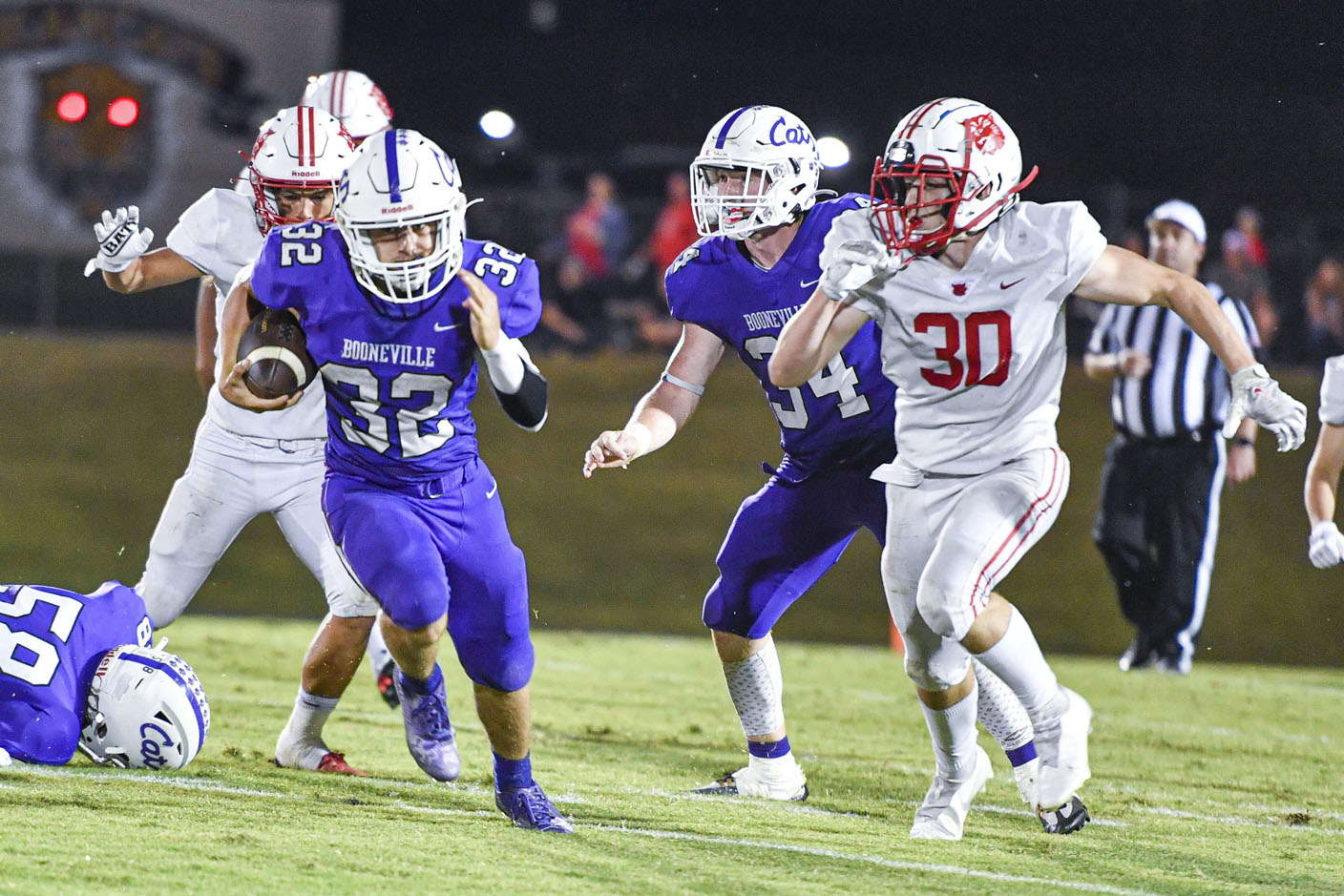 Cody Elliott (32) of Booneville carries the ball as Peyton Cole (30) of Harding Academy pursues Sept. 16 during the third quarter of the Harding Academy’s 44-14 win at Bearcat Stadium in Booneville. (File Photo/NWA Democrat-Gazette/Hank Layton)

Rick On The Road — Football Towns

Each week, award-winning Northwest Arkansas Democrat-Gazette sports columnist Rick Fires will go on the road across the region, visiting communities where football is an integral part of the Friday night fabric. Award-winning photojournalist Charlie Kaijo will document the journey through interviews and photographs that illustrate what makes each town a football town.

Prep Rally Game Of The Week

Chip Souza and Rick Fires break down the Prep Rally Game of the Week as Bentonville West travels to Fayetteville, and Farmington looks to take a stand at Harrison in the 5A-West opener.

Hannah Cervantes (from right), a senior at the University of Arkansas-Fort Smith, helps serve coffee-infused horchata and sweet bread to Maria Garcia, Yahir Artero and Nathaly Artero, a sophomore at the university, and others, Thursday, Sept. 22, 2022, at a Cafecito y Pan Dulce (or Coffee, Culture, and Conversation) event...

FORT SMITH -- The Western Arkansas Planning and Development District has set its sights on relocating its office, with the Chaffee Crossing area being a strong possibility.Sasha Grist, district executive director, told the district's Board of Directors on Wednesday that the sites its building committee looked at last month in...

Jack ShamblinJack Shamblin, 79 of Sallisaw died September 21, 2022 in Fort Smith. Graveside Service will be 10:00 AM Monday at Sallisaw City Cemetery - Sallisaw, Oklahoma under the direction of Agent Mallory Martin Funeral Service, Inc.He is survived by wife, Kaye of the home; two sons, Jacky Shamblin of...