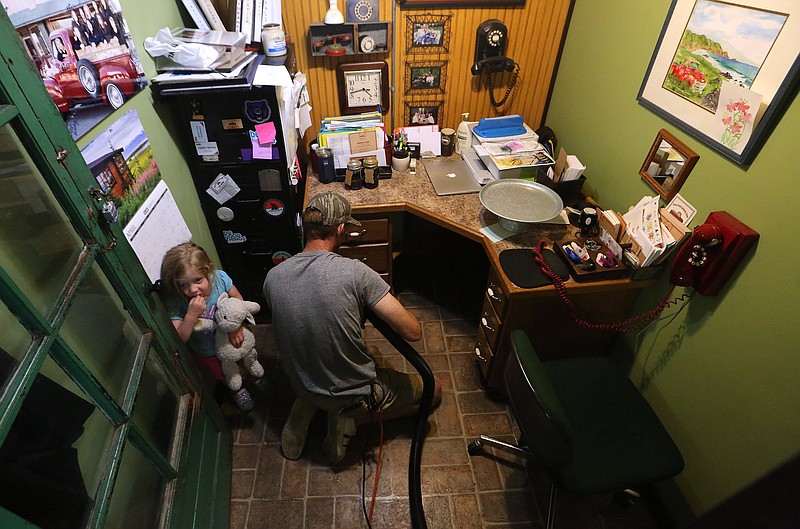 Derek Bailey, co-owner of Cross Creek Sandwich shop in downtown Conway, uses a wet-vac to vacuum up two inches of water as his daughter, Nora, 2, looks on. (Arkansas Democrat-Gazette/Thomas Metthe)

The Fazoli’s at 3701 Warden Road, North Little Rock, behind the Target in The Other Center, opened Tuesday on schedule, though we had some difficulty for awhile reaching anybody at the listed phone number, (501) 414-8697. The restaurant has been duly listed among three Arkansas locations at locations.fazolis.com/ar.html. Hours are 10:30 a.m.-10 p.m. daily.

The Damgoode Pies in the wedge-shaped building at 2701 Kavanaugh Blvd., Little Rock, which had been closed for months, reopened a couple of weeks ago under our radar, for dinner only: 4-8 p.m. Sunday-Monday and Wednesday-Thursday, 4-9 p.m. Friday-Saturday. (501) 664-2239; damgoodepies.com.

We have a slight progress report on the opening targets for pending Central Arkansas outlets of Jersey Mike’s: this summer for the one at the Shoppes at Chenal, 24100 Chenal Parkway at Cantrell Road, Little Rock, and this fall for the one at 3901 Warden Road, North Little Rock, in the parking lot of The Other Center, in proximity to Target and the Texas Roadhouse and close to the pending Chicken Salad Chick. The chain has existing outlets in Benton and Conway; two more are in the works for Fayetteville.

And speaking of Chicken Salad Chick, a tentative March opening target has passed and we’ve been unable to extract a new one from either Facebook or the website, chickensaladchick.com.

◼️ The folks who run Cache, 425 President Clinton Ave., apparently plan to expand, taking in part of the adjoining 100 River Market Ave., and spend $70,000 for construction of a DJ booth and bar and to create an office space with wall-mounted wine racks.

◼️ Plans to spend approximately $60,000 to, among other things, paint the exterior of the Waffle House at 1220 Rebsamen Park Road, “old redwood” color with gray accent stripes. The other things include replacing six two-person booths with three four-person booths, replacing low counter seats and installing a new extended cash stand. Also pending: replacing some lighting fixtures, repairing the roof and installing some new flooring in spots.

Derek Bailey and his wife had just signed papers to take over ownership of the Cross Creek Sandwich shop, 1003 Oak St., Conway, the week before when Monday’s storms hit. Bailey, his pregnant wife and young daughter hid in a hallway of their Warsaw home as a storm with possible tornadoes passed over; shortly after the sirens stopped, they received a phone call that the sandwich shop was flooding. “With the help of many different people,” Bailey says, including the Fire Department, an insurance agent, church members and friends, they got the water out of the restaurant, which was set to open Tuesday without interruption.

We don’t yet have a target opening date, but a Freddy’s Frozen Custard & Steakburgers is under construction at 1200 W. Main St., Cabot. Our confirming authority is the website, freddysusa.com/store/cabot-coming-soon, which also provides the hours of operation once it opens: 10:30 a.m.-10 p.m. Sunday-Thursday, 10:30 a.m.-11 p.m. Friday-Saturday.

Cherokee Village is hosting Arkansas’ statewide Pie Festival, 10 a.m.-4 p.m. Saturday at the Cherokee Village Town Center, 7 East Cherokee Village Mall, after two years of pandemic-caused cancellations. The festival, sponsored by Emerson manufacturing, includes a competition for professional pie makers from around the state. Judges and attendees will sample pies of all varieties before crowning a champion baker. Pies from amateur and student bakers will also be on display and auctioned off for charity.

The festival will end with a silent pie auction and awards ceremony. Festival proceeds support STEAM (Science, Technology, Engineering, Art and Math) programming and education through the community’s Spring River Innovation Hub. Tickets are $10 in advance, which includes the pie tasting, $12 at the gate, $5 for children 5-12. Visit arkansaspiefestival.com.

And Mark Abernathy, owner-chef at Local Luna and Red Door, will represent Arkansas and Oaklawn Racing Casino Resort, the Hot Springs track that sends several horses each year to the Kentucky Derby, at the Taste of Derby event, a high-profile charity tasting event, 7-10 p.m. May 5, the Thursday preceding the big race. The event draws 1,300 guests and 15 top American chefs representing cities on “The Road to the Derby” to the YUM! Center in Louisville, Ky. It raises money and awareness for Dare to Care Food Bank in Louisville and culinary scholarships at Sullivan University. Abernathy will serve a pulled pork razorback nacho topped with the original white cheese dip (his) and crispy fried jalapenos.

Has a restaurant opened — or closed — near you in the last week or so? Does your favorite eatery have a new menu? Is there a new chef in charge? Drop us a line. Send email to: [email protected]