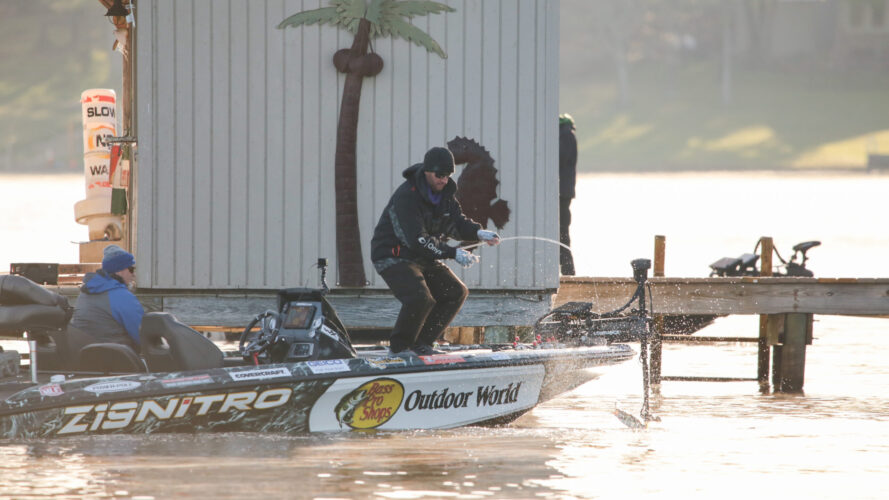 TYLER, Texas – A chilly morning turned into a beautiful day on the water in East Texas Saturday, but it was still a tough day of fishing for anglers on a stingy Lake Palestine at the third-annual General Tire Heavy Hitters Presented by Bass Pro Shops. After Day 1 of competition concluded at 4 p.m., pro Ott DeFoe of Blaine, Tennessee, held the early lead catching 11 scorable bass weighing 35 pounds, 9 ounces.

Pro Bradley Roy of Lancaster, Kentucky, caught the heaviest bass of the day Saturday – a chunky largemouth weighing 6 pounds, 9 ounces, that came on a trick worm in Period 2. If Roy’s fish remains the largest bass weighed by Group A after the conclusion of the two-day Qualifying Round on Monday, he will take home a $25,000 Big Bass Bonus. Big Bass Bonuses are awarded throughout the competition, with payouts of $25,000, $50,000 and $100,000 being awarded for the single biggest fish in the Qualifying, Knockout and Championship rounds.

DeFoe will bring a 10-pound, 12-ounce, tournament lead into Monday’s second day of competition for Group A. In second place on SCORETRACKER® is the REDCREST 2022 Champion Bobby Lane of Lakeland, Florida, who caught 11 bass totaling 24-13, while Tokyo, Japan’s, Takahiro Omori, who now resides 60 miles northwest in Emory, Texas, sits in third place with seven bass weighing 24-5.

“I’m pretty happy with the day – it was a good start and I really was not expecting it to go quite that well,” DeFoe said in his postgame interview. “I caught a couple of fish this morning with a swimjig targeting the shad spawn, but sight fishing was the main deal for me today.”

Besides the swimjig, DeFoe credited two baits as being his key to success Saturday.

“When I could see them, the best thing that I could get to aggravate them was the VMC Tokyo Rig, with a 4½-inch swimbait on the back of it,” DeFoe said. “Something about the way that rig keeps the bait off of the bottom, just a little bit, drives those fish crazy.

“The other one that I caught a lot of fish just pitching around – as well as fish that I’d get fired up with that swimbait – was a Texas-rigged Bass Pro Magnum Fin-Eke Worm. I used Sooner Run color – kind of a dark watermelon with red fleck – and fished it on my favorite setup, a Johnny Morris Platinum rod and reel with 40-pound braided line and a 17-pound (Bass Pro Shops) XPS fluorocarbon leader.”

The standings for the 16 pros from Qualifying Group A on Lake Palestine are:

Full results can be found at MajorLeagueFishing.com.

Overall, there were 68 bass weighing 217 pounds, 10 ounces, caught by the 16 pros on Saturday, which included one 6-pounder and two 5-pounders caught from Lake Palestine.

The 16 anglers in Group A compete in their two-day qualifying round on Saturday and Monday – the 16 anglers in Group B on Sunday and Tuesday. After each two-day qualifying round is complete, the anglers that finish in second through eighth place from both groups advance to Wednesday’s Knockout Round, while the winner of each group advances directly to Thursday’s Championship Round. In the Knockout Round, weights are zeroed and the remaining 14 anglers compete to finish in the Top 8 to advance to the Championship Round. In the final day Championship Round, weights are zeroed and the highest one-day total wins.

Anglers will depart at 7 a.m. from the Villages Marina, located at Big Eddy Road in Flint, Texas. Anglers are allowed to trailer to any boat ramp of their choosing on Lake Palestine, but competition begins with “lines in” at 8 a.m. Each day’s General Tire Takeout will be held at the Marina, beginning at 4:30 p.m. Fans are welcome to attend all launch and takeout events and also encouraged to follow the event online throughout the day on the MLF NOW! live stream and SCORETRACKER® coverage at MajorLeagueFishing.com.

The General Tire Heavy Hitters 2022 features anglers competing with a 2-pound minimum weight requirement for a bass to be deemed scorable in the Qualifying and Knockout Rounds, but for the final day Championship Round a bass must weigh at least 3 pounds to be deemed scorable. Minimum weights are determined individually for each competition waters that the Bass Pro Tour visits, based on the productivity, bass population and anticipated average size of fish in each fishery.

To qualify for the General Tire Heavy Hitters 2022 event, the weight of an angler’s single-largest bass from each event of the seven 2021 Bass Pro Tour events was recorded. The 32 anglers with the heaviest five big-fish totals from those seven events qualified to compete in this event.

The MLF NOW! broadcast team of Chad McKee, Marty Stone and J.T. Kenney will break down the extended action on all five days of competition from 7:45 a.m. to 4:30 p.m. MLF NOW!  will be live streamed on MajorLeagueFishing.com and the MyOutdoorTV (MOTV) app.

Television coverage of the General Tire Heavy Hitters 2022 Event will be showcased across six two-hour episodes, premiering at 7 a.m. ET, July 16 and running each Saturday through Aug. 20 on the Discovery Channel. A one-hour special episode of MLF Inside Heavy Hitters will also air on CBS in late 2022. New MLF episodes premiere each Saturday morning on the Discovery Channel, with additional re-airings on the Outdoor Channel and the Sportsman Channel. Each two-hour long reality-based episode goes in-depth to break down each day of competition.