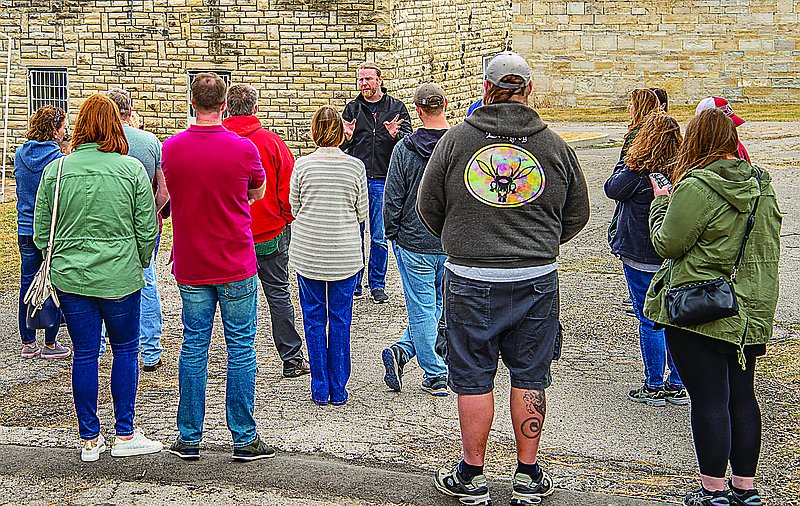 One of the most anticipated seasons in Missouri started this week, and we’re not talking deer or turkey seasons.

The 2022 Missouri State Penitentiary tour season started Saturday with historic Housing Unit 4 back on the tour, reclaiming its spot as one, if not the most popular stop, for MSP tourists.

After having to deal with a tornado that damaged Unit 4 and other parts of the prison in 2019, and then the COVID-19 pandemic forcing the suspension of tours for a time in 2020, officials with the Jefferson City Convention and Visitors Bureau were excited to have a full, hopefully uninterrupted tour season this year.

The prison is still owned by the state, but the tours conducted by the CVB help fund preservation of the historic buildings.

Not only were those who went on tours this first weekend excited to go through the prison once named, “The bloodiest 47 acres in America,” but so were the volunteers who give the tours.

Tour Guide Mike Lear had 20 on his first two-hour history tour Saturday morning and he was expecting around 40 to go on the afternoon tour.

“We have a blast doing this,” Lear said. “People on the tour today reminded me of how many connections this prison has to people across the state. A gentleman told me he believes his father and grandfather were on Little League teams that played on the prison field as recently as the 1970s.”

Because the tours have become so popular, not only are people coming from other parts of the country, but other parts of the world. The history tours immerse visitors in the prison’s past with stories about the inmates and staff who walked its halls.

“I personally have had tour guests from China, from all parts of Europe, from New Zealand, Australia,” Lear said. “I had a woman a couple years ago tell me she came from New Zealand to do this. She came here to take this tour and was going back home. That’s all she came to Jeff City for. What else is going to bring someone to Jefferson City all the way from New Zealand?”

CVB board members said getting Housing Unit 4 back open was a top priority. Without that building in the tours, tickets sales were down, but were better than expected in 2021. They had predicted 21,000 for the season and ended up just shy of 26,000 visitors. They surpassed their visitation goal by 23 percent and generated nearly $551,000 in tour revenue. MSP visitors made a $2.8 million economic impact on the city last year whether they stayed at a hotel, ate at a restaurant or visited another attraction.

Prior to the tornado and COVID-19, tours were drawing more than 30,000 visitors a year, CVB officials said.

After the roof on Unit 4 was installed at a cost of $830,000, CVB staff and a handful of volunteers began the cleanup process, but quickly realized it was going to take more time and labor to clean all four levels of the building. They decided to focus on clearing the main floor and the dungeon cells so for the 2022 season guests will only have access to those two areas of the building.

Saturday was the first visit for Lisa Pierce from Jonesboro, Arkansas. She was impressed with the amount of history that took place at this site.

“We have driven by here many times visiting and I’ve always been interested in it just because of the architecture,” Pierce said. “It’s just so beautiful, and it’s kind of a bittersweet thing to imagine all the lives that have been lost here. … I really hope that people come out and see this more, and I’m going to take it back home with me and spread the news.”

If there was anything that surprised Pierce, it was how cold the prison buildings were.

“To know that people actually lived in these buildings and how harsh the environment was; I know this was a prison and wasn’t supposed to be a country club, but it’s just amazing how different times are now compared to the 1800s,” Pierce said.

MSP was opened in 1836 and continued operating as a prison until 2004 when the state opened the new MSP in the Algoa area.

With Housing Unit 4 returning this season, tours are back to how they were prior to the spring of 2019. Along with history tours, ghost and photography tours are available. Tours range from two to eight hours in length dependent on a guest’s tour selection.

Miguel and Olivia Reveles, along with their mom Annie, came from Marshfield in Southwest Missouri to take a tour.

“We always see the tours on the big billboards and we thought since we were coming this way we should take some time to do this,” Annie said. “It was more than we thought it would be. We love history, and we love to learn about stuff, and we love the paranormal stuff, too, so it was interesting to learn what all went on in these buildings.”

CVB officials have been cautiously optimistic about the 2022 season hoping school and leisure groups will start coming back for tours. The goal is to surpass 2018’s visitation rate of more than 30,000 visitors, which was the last uninterrupted season.

“I’m just a history nut that loves to share these stories, but a lot of the people that do our tours used to work here,” Lear said. “The one thing we all have in common is a love for this place.”

In the accompanying video, tour attendees from out of town talk about why they enjoyed the Missouri State Penitentiary history tours.