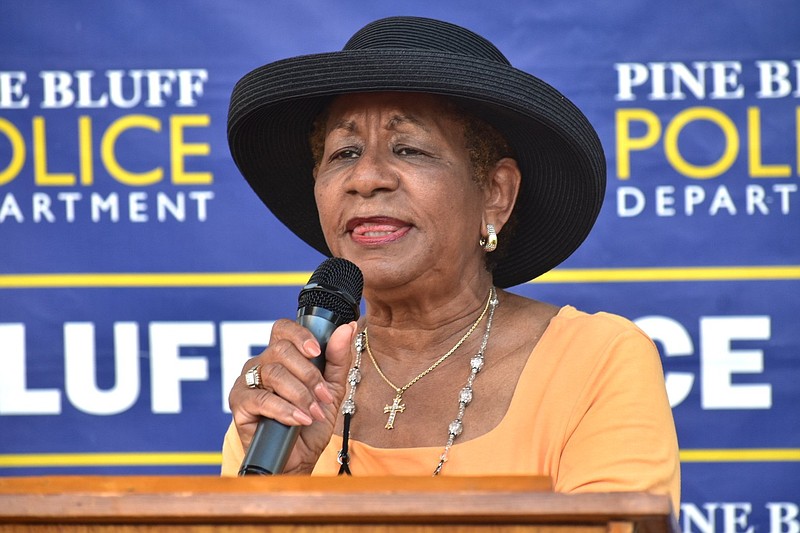 The event will be held from 10 a.m. to 2 p.m. Feb. 26 at the Hillary Rodham Clinton Children’s Library and Learning Center at Little Rock, according to a news release on Stuff in The Bluff.com.

Washington is the second of seven children born to Willie and Blanchie Clinger Moorehead at Gethsemane.

“While her parents toiled to make a living on the family’s small cotton farm, they vehemently stressed the importance of hard work and the value of education. The children were taught that church and school would be their passport from a life of field labor to successful futures as skilled professionals,” according to the news release.

“This resounding message was not lost. Both father and mother, with third and sixth grade educations, respectively, were blessed to witness in their lifetime, all seven of their children receive college degrees, enter respectable careers, and become God fearing, law abiding, productive citizens.

“As she listened to all of her siblings plan lives in other states throughout the country, Shirley decided to make Arkansas her home,” according to the release.

“Mayor Washington realized at a young age that she had a gift for teaching. Her patience and love for children made her a natural motivating force in the classroom. She retired after 38 years of service in the public schools of Jefferson County, which included 22 years in the classroom and 16 years in school administration. Her goal was simply to make a difference, become a positive impact in the lives of the children in her community. That led to involvement in many organizations and boards over the years,” according to the release.

Washington has been president of the Pine Bluff Education Association, member of the Arts and Science Center for Southeast Arkansas Board of Directors, and the Pine Bluff/Jefferson County Library Board.

The mayor has assisted her husband, Frank, in his construction business for the past 25 years.

“From this experience she has gained a profound insight into, and generated a growing interest in community development and revitalization. She and her husband are members of the Old St. James Missionary Baptist Church. They are the proud parents of three adult children and they enjoy three grandchildren.

“In October 2015, Mayor Washington entered the political arena, launching an effective campaign for mayor of Pine Bluff, Arkansas. Her promise to provide strong visionary leadership and to be a servant leader propelled her to victory in this historical election. And, on Jan. 1, 2017, she became the first African-American woman to hold the highest office in the city of Pine Bluff,” according to the release.

“During her first term, she worked tirelessly to make great strides in unifying the community to improve the quality of life for its citizens. To name a few of her accomplishments: she led the charge and opened the doors to a one-of-a-kind aquatic center and supported the completion of a state-of-the-art public library, completed Phase I of the downtown streetscape revitalization, established the Mayor’s Youth Council, renovated the Pine Bluff Community Center (formerly the Merrill Center), partnered with the Quapaw Tribe to develop Saracen Casino and Resort, assisted in the development of a downtown elementary school and helped to orchestrate the return of the King Cotton Classic.

“In her second term, her goals include continuing to invest in our youth, reduce crime, and revitalize our community with affordable-quality housing and job opportunities. As she leads by example, she hopes to inspire and encourage others. The city is on the rise and at the crest of becoming that ‘Destination City’ for Southeast Arkansas. She calls upon everyone with a passion for Pine Bluff to give back and join this renaissance,” according to the release.

The Arkansas Heritage Celebration of Black History Month is sponsored in part by the Jason Irby Innovation Foundation, the Central Arkansas Library System, the Sequoyah National Research Center and the University of Arkansas at Little Rock School of Mass Communications. Covid protocols will be observed at the celebration.