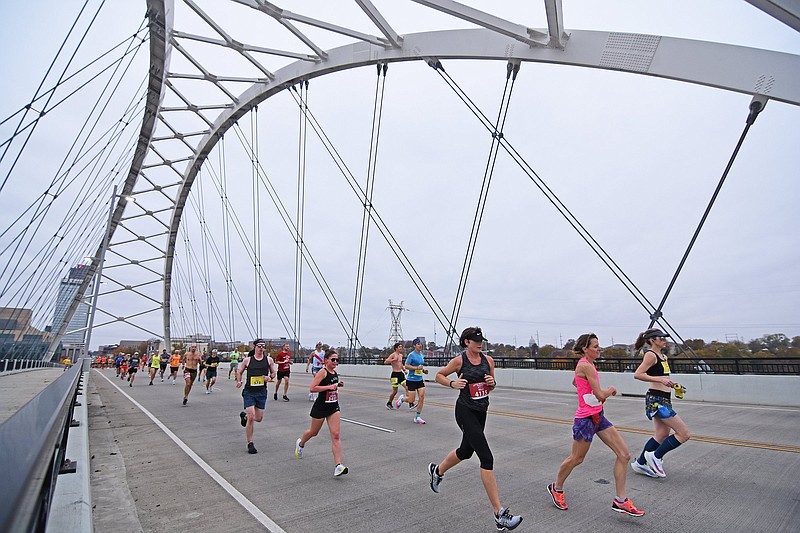 Little Rock Marathon events will continue today with early start at 6 a.m., wheelchair and hand cycle starting at 7:55 a.m. and the marathon beginning at 8 a.m. Check back here for updates.

Long marketed as a race for every pace, each of the events reflects fields of entrants diverse in multiple ways, led primarily by levels of fitness and pace. Unfortunately, the marathon’s most prominent recent star will not start.

Five-time Little Rock Marathon winner Tia Stone hoped to set the record for most victories, a mark she shares with Leah Thorvilson. But she was diagnosed with covid-19 for the second consecutive winter and has decided not to race.

“It was a tough call, but I just was not able to train the way I wanted to for a marathon,” Stone said. “I feel a lot better now, but the difference between just being healthy enough to live life or to train for a marathon are just at a different level. I really hate missing this one, because I was going to try to go for No. 6.”

Front runners typically dominate attention, but races themselves are in place and meaningfully financed for and by everyone else.

Mid-pack entrants like Aaron Burros, a 51-year-old retail manager from Houston, show up with objectives other than their orders of finish.

“My purpose in running is to serve,” Burros said. “To serve the running community.” Burros first ran for a more common reason. Ten years ago, he weighed 400 pounds. He will will start Sunday’s marathon at less than 200, but also with a mission to encourage everyone else en route. Enthusiasm seems to come naturally for Burros, founded in part by his weight loss and improved health, but his recovery from nearly certain death undoubtedly played a part.

One day after Thanksgiving, Black Friday 2015, Burros was shot five times in the abdomen while at work at a home-improvement center near Houston. Once his survival from the physical trauma was insured, psychological burdens remained in place.

“I went through years of experiencing [post-traumatic stress disorder] and just experiencing stuff I’ve never experienced,” Burros said. “I started trying to piece my life back together and to gain hope back in humanity.” In that search, Burros said he became a fundraiser for several charitable organizations, including St. Jude Children’s Research Hospital in Memphis.

Burros said he also wanted a feeling of safety.

“Traveling and going to races, where I knew there would security in place, it provided a safety factor for me,” Burros said.

He said he comes to Little Rock for the enjoyment of its marathon.

“I really liked the race in November,” Burros said. “I did the half, but this time I’m going to do the full.” Because of covid, the 2021 Little Rock Marathon was delayed from March until Nov. 21.

Casey Orndorff, 31, a software developer from Annapolis Junction, Md., in suburban Baltimore, will probably finish at least 20 to 30 minutes behind the Little Rock Half-Marathon winner. The difference will be that Orndorff was born with cerebral palsy.

“It’s due to a brain injury at birth in most contexts,” Orndorff said. “That would be my situation. I was born three months early.” Orndorff has spastic cerebral palsy, caused by motor cortex damage, which puts the specificity of his disease in a category shared by about 70% to 80% of the nearly 750,000 current U.S. citizens with cerebral palsy.

“For me, that means I have stiffer than normal muscles on my right side,” Orndorff said. “I also have coordination issues with my right side as a result. That can lead to impaired muscle strength and impaired muscle endurance. With running, it impairs my stride on my right side, so basically all my biomechanics when I’m running.” Orndorff became the first known runner with cerebral palsy to break two hours in a half-marathon when he completed the 2019 Little Rock race in 1:59:27.7. Though no official records are kept, Orndorff said his research has yet to uncover a faster half-marathon than his 1:42:45.0 run in Little Rock on Nov. 21. He said he hopes runners with cerebral palsy will gain the same recognition as other disabled athletes.

“I do it for the love of it,” Orndorff said. “It keeps me healthy, but for me, it’s important to keep track of people with cerebral palsy doing this sort of thing. You know, if there’s another kid or anyone coming after me and if there’s no evidence of people having done it, they may not even try. There are a lot of implications.” Orndorff said he enjoys this weekend of races in Little Rock because of the way it rewards handicapped athletes but also because of how much fun it is for everyone.

“I’ve been to several different venues, but Little Rock is something else,” Orndorff said. “I remember one year someone was handing out mimosas at about Mile 10. If I wasn’t going for a record, I would’ve been drinking for sure, but everyone’s just so super friendly. It’s just a constant barrage of support, and I love it.” Whereas Stone, a 42-year-old administrator at Harding University in Searcy, says she knows races are for everyone.

“They’re what makes every race,” Stone said. “That’s who people come out to cheer for. They’re just everything in a race, and I’ve been that kind of runner, too, where I’m just trying to finish it. For several years, when I competed in a marathon or a half-marathon, I had a time goal maybe or just a goal to finish it and experience it. I’ve been that person many times.”

— Pete Perkins Special to the Democrat-Gazette 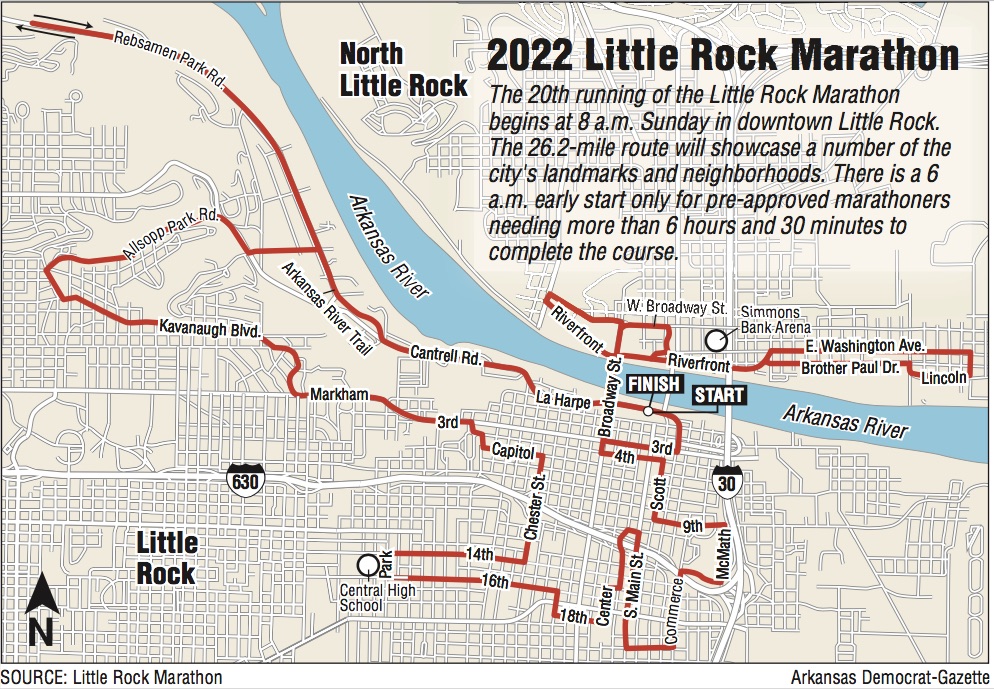