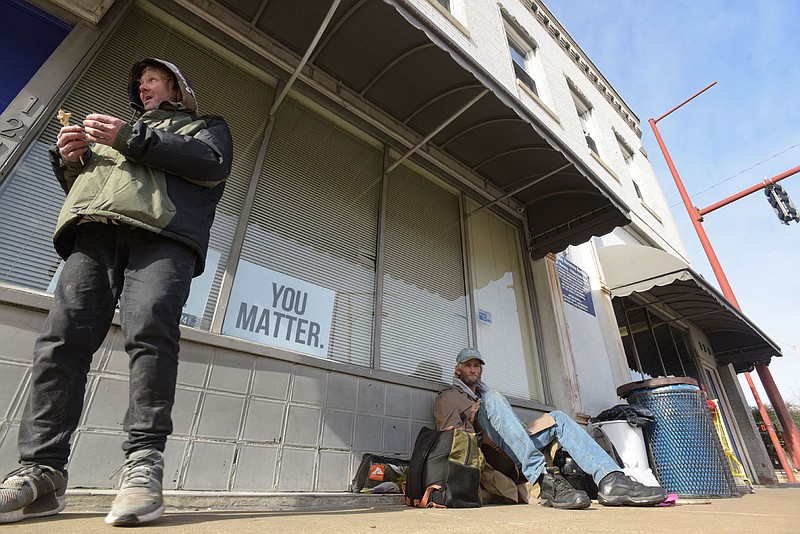 John Beasley (left) and Terry Manns visit with each other on Thursday, Jan. 6, 2022, outside The Next Step, a homeless shelter and day room in Fort Smith. The city’s Board of Directors recently heard public opinions about whether to rezone a property at 1400 U Street South to allow for the expansion of Next Step, which currently operates at 123 North Sixth Street. Visit nwaonline.com/220109Daily/ for today’s photo gallery. (NWA Democrat-Gazette/Hank Layton)

FORT SMITH –After hearing extensive feedback from the community Tuesday, the city directors decided to table an item regarding rezoning 1400 S. U St. from commercial heavy to a planned zoning district, which would allow for construction of a day room for Next Step Homeless Services.

Maggie Rice, the city’s Development Services director, said the property is 3.9 acres and the proposal is for a homeless shelter that includes a kitchen, laundry room, showers, outdoor pet space and noncongregate housing. She said the Planning Commission held a public hearing in December regarding the application, and four people spoke in opposition to the proposal, citing concerns of its appropriateness in the area and its proximity to homes and public schools.

The commission denied the application in a 7-2 vote, leading Sharon Chapman, executive director of Next Step Homeless Services, to file an appeal.

“Our $2.3 million facility will have a positive economic impact on our community and the area,” she said. “We will be utilizing local construction and material to build the facility, and hiring additional staff to work there. With these industries being so affected during the pandemic, this type of project will be a benefit to our community’s economic well-being.”

Chapman said Next Step provides housing for over 50 individuals in the community. She said they have spent two years searching for a location large enough to meet their needs and close to other essential services such as the parole office, the DMV, Good Samaritan, Hope Campus and the Salvation Army.

This type of housing shouldn’t be in an industrial area, which is why Next Step is attempting to move from its 123 N. Sixth St. location, Chapman said.

Chapman said she doesn’t see reasons why homeless people would walk to residences when they’d have closer access to essential facilities. She also noted the current location is close to several schools including Inter-Faith Preschool, Darby Middle School, and Tilles and Howard elementary schools, and they haven’t had any incidents regarding homeless people.

“I spoke to the Fort Smith Public School Police Department today, and they reported the same thing to me,” Chapman said. “No incidents with the homeless in schools. Homeless are not interested in being at the schools and causing trouble there. The data confirms that.

“Our facility will be well-lit, gated and secured, with video surveillance and staff,” she said. “We will see and be able to work with the police to report what’s going on in that area, whereas currently it’s unattended. Crime in the oppositions’ neighborhood appears to be related to porch fires, theft and vandalism from people who are not homeless.”

Chapman said Next Step has responded to several city requests including not allowing tents outside their facility or giving them out to homeless people, participating in anti-panhandling campaigns and posting no trespassing signs when Next Step is closed.

“We’ve modified many parts of our services in order to address the concerns of the downtown while still sticking to our mission of serving the homeless in our community,” she said. “We’ve done our part. We are asking you to make it possible for us to move to this location, provide new services to meet the needs we see and positively impact the future of our downtown.”

Resident Neal Cowne said he and others opposing the proposal don’t oppose helping the homeless. Next Step and nearby residents have no way to control where homeless people go when they leave the facility, he said. He also noted Next Step hasn’t provided any plans regarding how security will be provided, how the facility would be maintained, long-term funding plans and maintenance for sustainability, or the long-term impact of the surrounding area.

Cowne also questioned why Next Step doesn’t partner with the Hope Campus to expand there.

The Riverview Hope Campus is in western Fort Smith at 301 S. E St.

“The Hope Center is currently utilizing 35,000 of 128,000 square feet,” Cowne said. “It has room to expand. So why not take an existing facility that’s under-utilized today — you supported it — put $618,000 for that facility and partner with that facility in a nonresidential neighborhood and work together to solve that problem when you have 98,000 square feet of empty space today.”

Susan Tucker, Next Step board president, said they are different than Hope Campus because they provide noncongregate housing.

“Many homeless people will not go to congregate housing,” Tucker said. “They’re sleeping 130-some people on mats on the floor. Men and women together. It’s not always safe for that. They’re worried about it, and they can’t be in a congregate facility.”

“We want to have a noncongregate facility so people have a place to be safe, get them off the streets. We have a 65% success rate of people who are in our housing programs moving out of homelessness and into homes where they pay rent or are able to buy something, and they work and they save and are able to become productive members of society,” she added.

About 12 other people spoke in favor of Next Step moving, with several being both area residents and Next Step board members.

Another 11 people spoke against Next Step, with nearly all being residents or property owners near the proposed location.

Rose Torrance, U-Haul Moving & Storage of Fort Smith manager, said she already has issues with homeless people at her business, which is a neighbor to the proposed Next Step facility. She worries about the increased traffic a homeless shelter would bring.

“They have intercourse in the back of my trucks. They do drugs in my parking lot,” Torrance said. “They like to use the bathroom in my parking lot. They’ve destroyed my bathrooms in my climate control building, and I’ve spent thousands of dollars in plumbing repairs. I have customers that come in over night to get into their storage and rent trucks, and they already don’t feel comfortable because people come up and bother them.”

Ward 3 Director Lavon Morton said he thinks the board needs further information before deciding on a change in property designation for the next 30 to 40 years. He asked the directors to prepare a list of questions to be discussed at the Jan. 25 study session, and the agenda item be voted on at the Feb. 1 meeting. 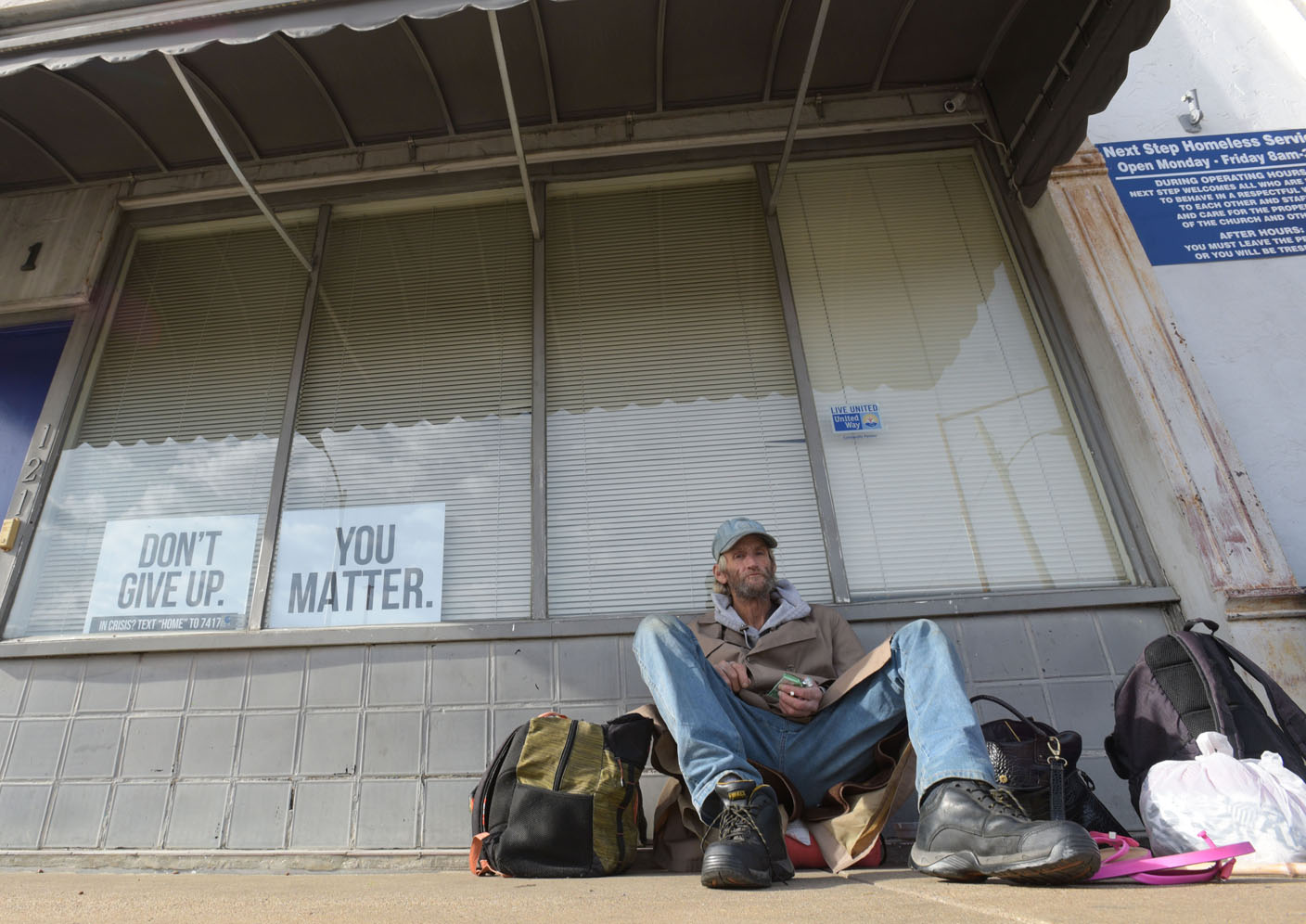 Terry Manns sits outside The Next Step, a homeless shelter and day room, on Thursday, Jan. 6, 2022, in Fort Smith. The city’s Board of Directors recently heard public opinions about whether to rezone a property at 1400 U Street South to allow for the expansion of Next Step, which currently operates at 123 North Sixth Street. Visit nwaonline.com/220109Daily/ for today’s photo gallery. (NWA Democrat-Gazette/Hank Layton) 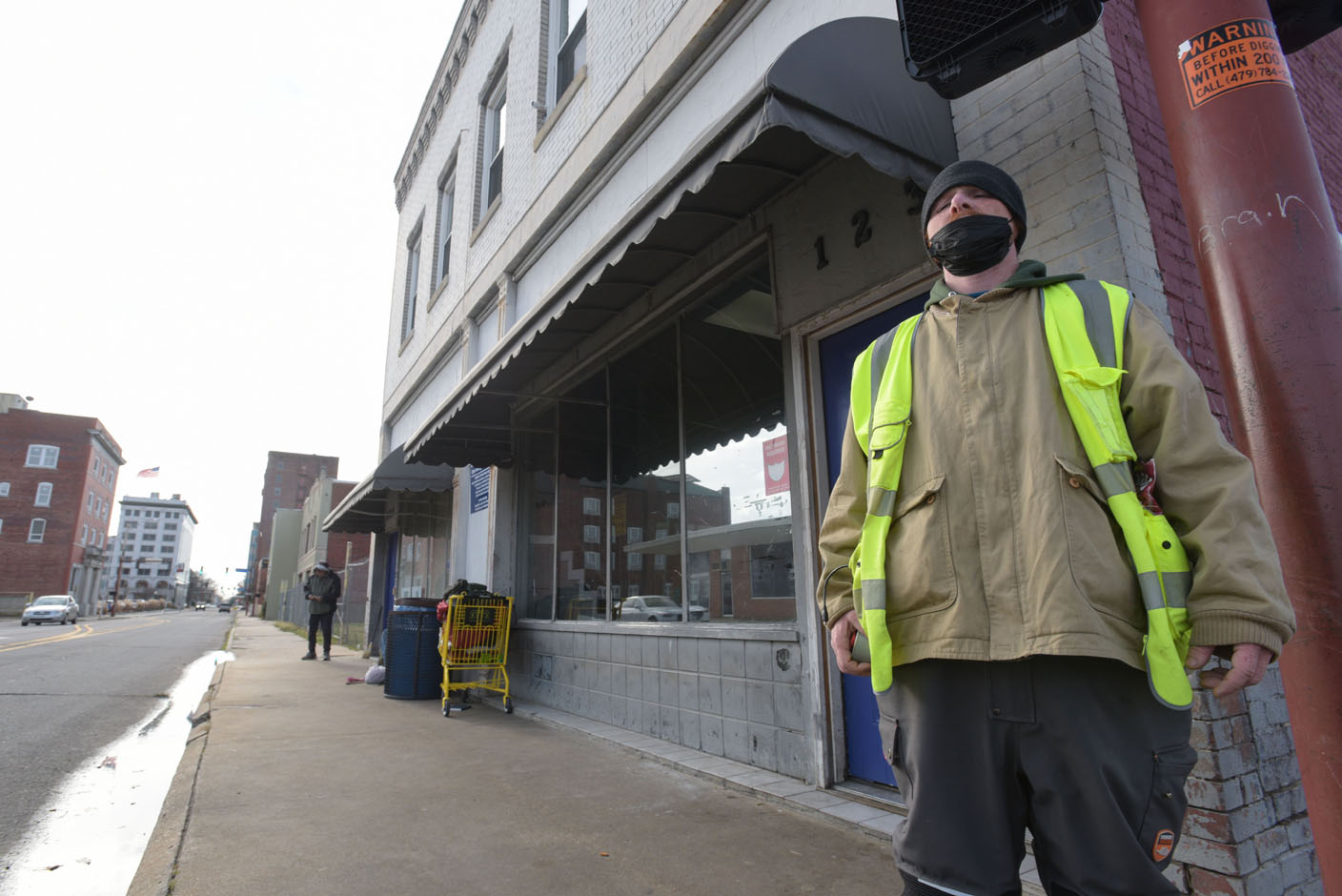 Billy Price, a volunteer, stands outside The Next Step, a homeless shelter and day room, on Thursday, Jan. 6, 2022, in Fort Smith. The city’s Board of Directors recently heard public opinions about whether to rezone a property at 1400 U Street South to allow for the expansion of Next Step, which currently operates at 123 North Sixth Street. Visit nwaonline.com/220109Daily/ for today’s photo gallery. (NWA Democrat-Gazette/Hank Layton)