For The Love Of Birds 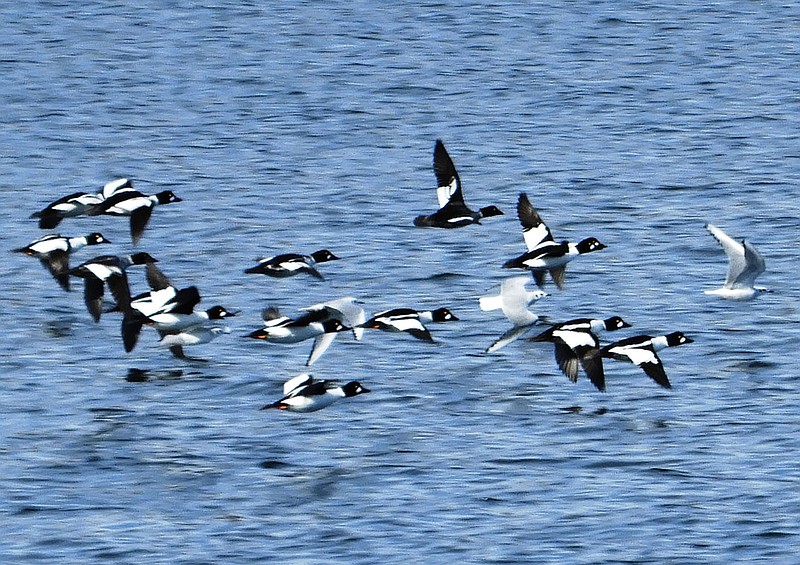 Birds of a feather

Nearly everybody has a spiffy wildlife blind sitting right in their driveway.

A car or pickup is one of the best blinds for watching wildlife. That’s the word from Joe Neal of Fayetteville, dedicated bird watcher and author of several books and hundreds of articles on birds and birding.

Wildlife is used to seeing vehicles on roadways, Neal explained. That includes songbirds, raptors and waterfowl that he sees up close with binoculars or a spotting scope on wintertime bird safaris.

Beaver Lake is one of his birding hot spots, particularly the day after a cold front sends temperatures falling below freezing. On this late January birding day at Beaver, the air temperature was a balmy 17 degrees.

Being one of the area’s foremost authorities on birds, Neal is happy to share birding tips and words of wisdom with his companions, including this day.

“Seventeen degrees is a good temperature to avoid,” Neal testified with his car heater roaring. Most bird-watching on this trip would be done with Neal nestled in the driver’s seat. He doesn’t leave the car much when it’s frigid outside.

Over the years, he’s developed two driving routes at Beaver Lake that reveal lots of birds, especially waterfowl. His chosen path depends on wind direction. If there’s a north wind, Neal might drive along the north shore of Beaver Lake with stops at Lost Bridge and Indian Creek parks and the Beaver Dam area.

A gentle wind blew from the east on this trip. Neal looked for birds along the lake’s south shore between Prairie Creek and Rocky Branch parks. He made several stops in between to scan the lake’s light chop with binoculars.

Stop No. 1 got the trip off to a fast start at the Arkansas 12 bridge boat launch and parking area. Twenty bufflehead ducks bobbed on the waves 75 yards off shore, much to Neal’s delight.

“Hunters call them butterballs because they’re so fat,” Neal said. He recorded the species and number of buffleheads in his field notes.

At Prairie Creek park, a number of gulls soared above a flock of Canada geese resting in a grassy area near the boat launch area. Other were in the Beaver Shores neighborhood, at two lakeside resorts and finally Rocky Branch park. All were hotbeds of bird activity seen from the comfort of Neal’s warm car.

At most stops, he scans the water with binoculars. When birds are seen, he reaches for a spotting scope that attaches to the top of his car window rolled halfway up.

One stop revealed the jackpot of the trip, a flock of 90 mallards that red-lined Neal’s excitement meter.

“January is mallard month,” he proclaimed. “This is when we see their maximum numbers. This is turning into a very ducky day.”

At Beaver, Neal said he’s duck hunting, all right, with his scope and binoculars. He can identify waterfowl species with the expertise of any wader-clad waterfowl hunter.

After each trip, Neal writes an essay on that day’s birding expedition that he emails to other birders. Numbers and species are also posted on Ebird, a national bird data base managed by Cornell University at Ithaca, N.Y.

“I love coming out here in the winter.” Neal said. “You don’t see many people or boats. Not many people are nutty enough to be out here when it’s this cold.”

His seventh-grade science teacher, Ruth Armstrong, inspired Neal’s love of birds. That was in Fort Smith at what was then Darby Junior High School. It’s Darby Middle School now.

“She was a bird watcher and had all kinds of bird things in her room. Old nests and stuff. It was just fascinating,” Neal said.

Later he read “A Sand County Almanac” by Aldo Leopold. Descriptions of birds and bird habits in the book thrilled Neal. He bought a decent pair of binoculars at a pawn shop in his 20s and rode his bicycle around looking at birds.

Over decades he’s moved from that bicycle seat to a warm car seat pursuing his lifelong love of birds. 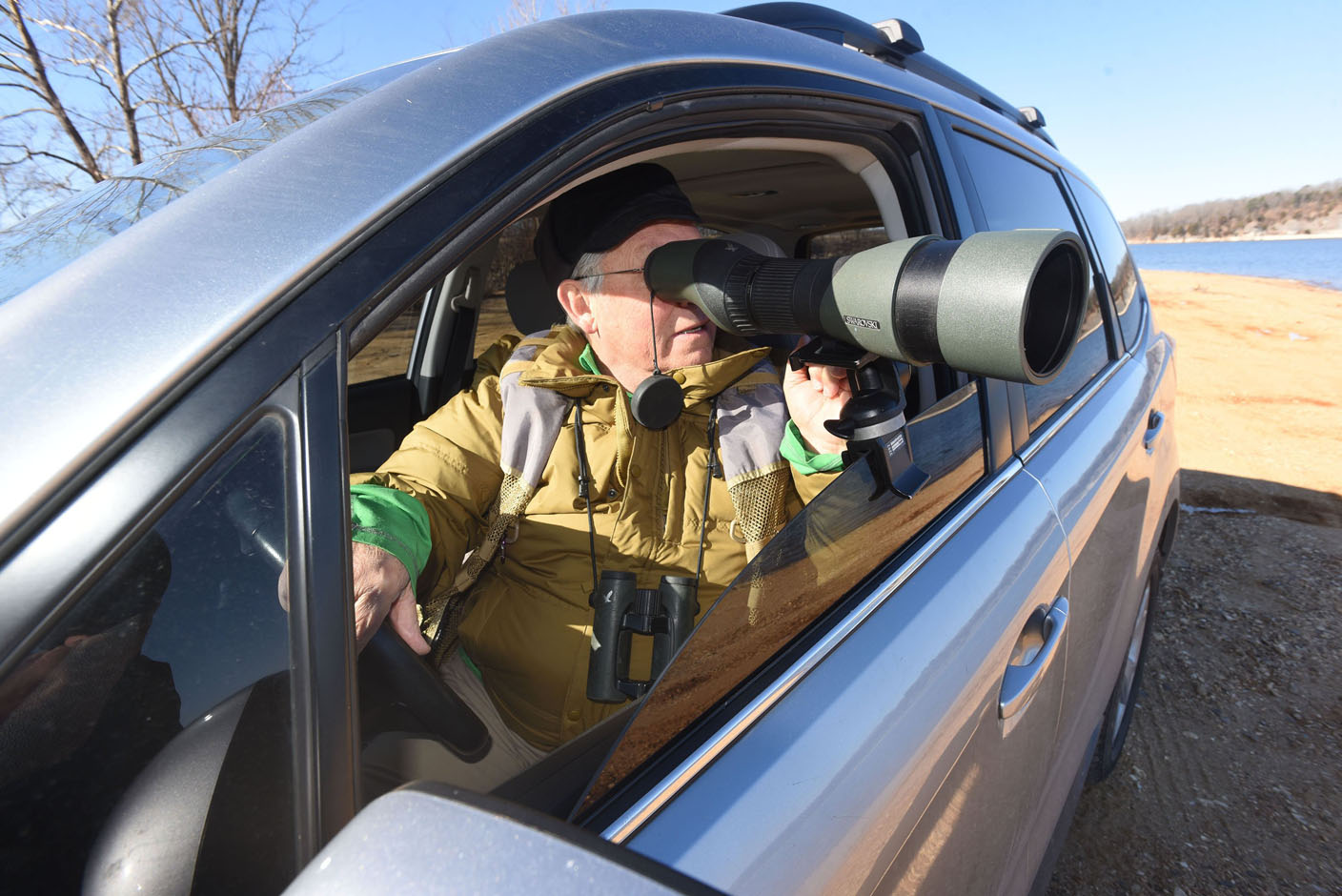 A car Jan. 27 2022 makes a fine bird-watching blind, and a heated one at that, for Joe Neal on cold winter days. Neal regularly looks for waterfowl and raptors at Beaver Lake when weather fronts bring bitterly cold weather. (NWA Democrat-Gazette/Flip Putthoff) 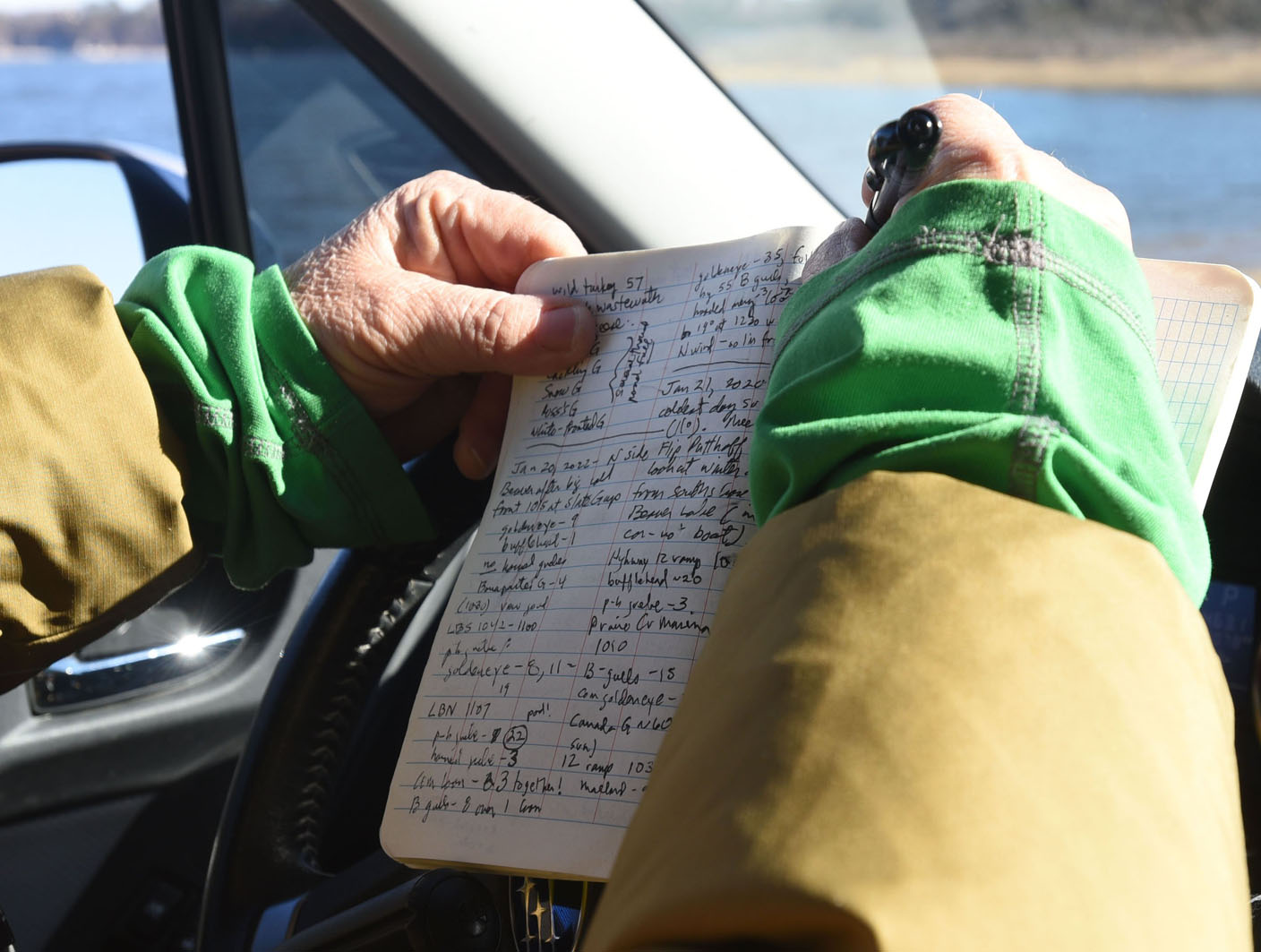 Each bird species seen, and their numbers, are jotted Jan. 27 2022 by Neal into his field notes. He posts the results of his bird-watching trips to online birding forums. (NWA Democrat-Gazette/Flip Putthoff) 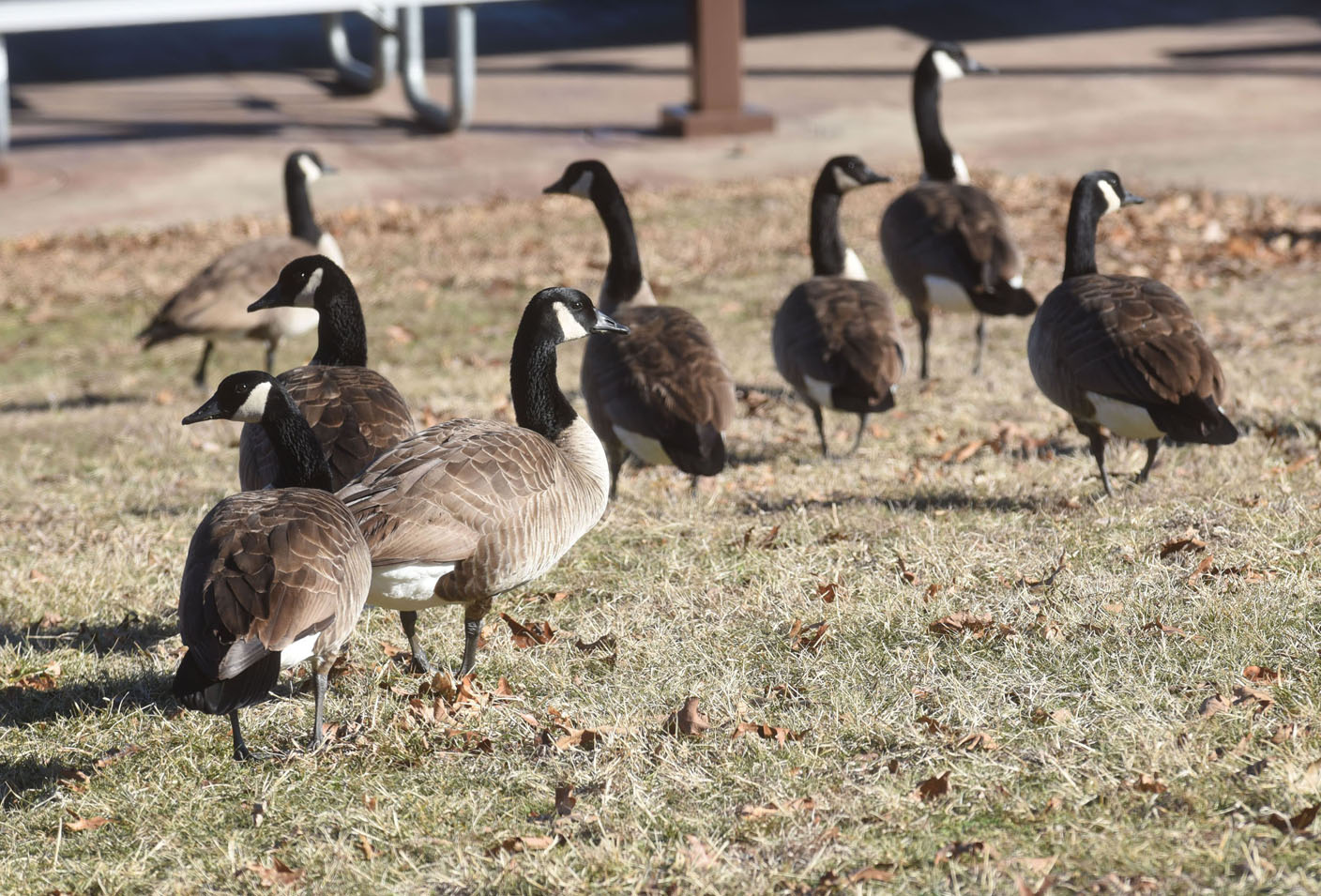 Canada geese were rarely seen in Northwest Arkansas 40 years ago. There was no hunting season on the birds. Now they’re abundant at Beaver Lake, on golf courses and parks around the region. Canada geese can be legally hunted several days each year from September through January. These Canada geese were seen at Prairie Creek park on Beaver Lake on Jan. 27 2022. (NWA Democrat-Gazette/Flip Putthoff) 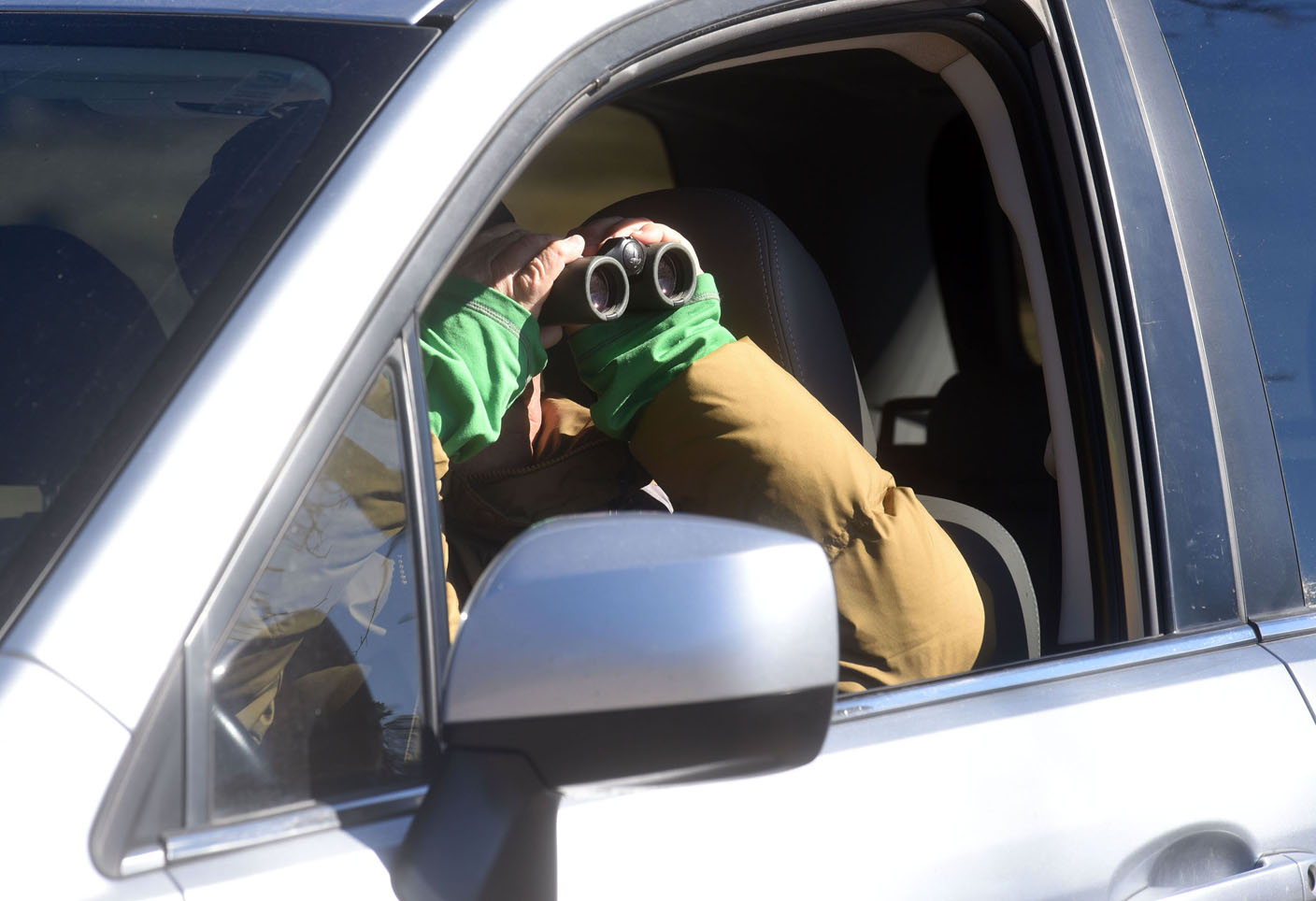