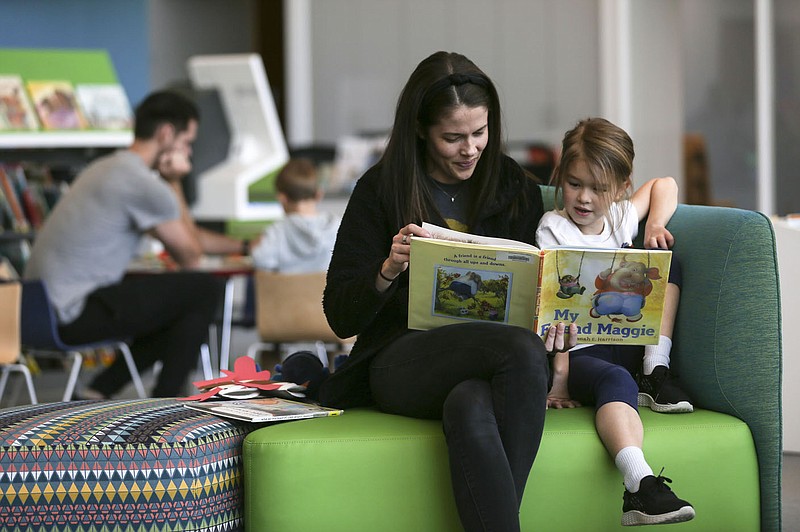 Haley McCready (from left) and Aurora McCready, 5, of Fayetteville read, Saturday, April 9, 2022 at the Fayetteville Library expansion in Fayetteville. The Fayetteville library is shifting its fundraising strategy to smaller donations to finish out the rest of money they need to pay for the expansion. Check out nwaonline.com/220410Daily/ and nwadg.com/photos for a photo gallery. (NWA Democrat-Gazette/Charlie Kaijo)

FAYETTEVILLE — The Fayetteville Public Library is ready to pay off its debt and hire more people to provide more services to patrons.

The library’s nonprofit foundation is launching a new phase of its capital campaign to help pay off the building’s expansion cost. Library officials have worked the past few years to solicit major philanthropic contributions. The strategy now is to “finish this chapter” and seek donations from the public at large, said Christina Karnatz, the library’s director of development.

The expanded library opened in January 2021. It was made possible through a property tax increase city voters approved in 2016.

The other 1.5 mills will stay to help cover operating costs of the expanded building. The foundation, the library’s nonprofit fundraising arm, has been working to raise money to cover the remaining $23 million.

The foundation mainly has sought contributions in excess of $250,000 for the past three years, Karnatz said. Now it’s turning to the rest of the community for support, she said.

“This is really an opportunity for people who might not have those sort of means to be able to contribute in a way that’s meaningful for them,” Karnatz said.

Major contributions have included $5 million from Jane Hunt and her family; $2 million from Jim and Nancy Blair; and recently, a $1 million commitment from the Willard and Pat Walker Charitable Foundation.

People will be able to donate on the library’s website, faylib.org, beginning this week, Karnatz said. They will have the option to choose whether to donate toward the capital costs, to an annual fund supporting operations or to a certain program at the library, she said.

Everything on the table

Part of the property tax increase supports the increased cost of operation associated with the expansion. The library also has revenue sources that go toward operational costs from the deli and event center within the expansion.

All of the new features of the expansion are up and running. However, the library needs more staff members to carry out programming, Executive Director David Johnson said. New features in the expansion include the center for innovation with several simulators and creative studios that can provide job training, the 700-seat event center, a yoga and dance studio, a teaching kitchen next to the deli and more programming for kids.

The $23 million the library foundation is trying to raise will repay bank loans. The sooner the library can pay off the loans, the sooner it can hire more staff to run the programs that will serve patrons, Johnson said. The library is holding off on hiring more people until it pays off its bank loans and would like to get people hired sooner rather than later, he said.

The interest rate on the loan is 4.25% and will become 3.95% once paperwork between Generations Bank and the library’s foundation goes through, Johnson said.

Library officials campaigned for the property tax increase in 2016 not knowing fundraising would be slow-going as a result of the covid-19 pandemic. The result was unexpectedly having to pay interest on a loan, Johnson said.

“That interest payment would be used for more staff, and as we pay it down, we will hire staff as we go,” he said.

The library has 229 volunteers who help fill gaps in staffing, Johnson said.

Johnson said the library is presenting the appeal to patrons as a return on their investment. The library continued services, for example, during most of the pandemic, he said.

The new features are impossible to ignore for people who knew the library before the expansion, Johnson said. The library also hopes to impress people who are new to town and gain their financial support, he said.

A dining in the dark event kicked off the new fundraising effort Saturday. Participants wore blindfolds while having a five-course meal prepared by the library’s chef, Matt Eiler, and Justus Moll of Catering Concepts. Tickets were $100 with a wine pairing for an extra $25.

More events are in the works, Karnatz said. Fundraising efforts will become part of the library’s outreach programs, with posts on social media and signs throughout the building letting patrons know of the campaign. There also are plans to put up a billboard alerting people of the campaign at rotating spots along Interstate 49, she said.

Johnson said everything is on the table.

“I’ll sit and let people dunk me in a dunking booth or throw pies at my face if I feel like we could raise some money doing it,” he said.

Charity Tyler, executive director of the Cedar Rapids Public Library Foundation in Iowa and president of national group membership organization United for Libraries, said financial support from working-class residents is returning to libraries now that economies are moving again. However, philanthropic groups and higher-income families helped cover the gap during the pandemic, she said.

Tyler used an example from her own work in Cedar Rapids. She noticed the $50 to $75 gifts to the Cedar Rapids library foundation subsided during the pandemic. But $200 to $500 gifts increased, she said.

Now that more people across the country have job security and are comfortable with going out in public with less of a risk of spreading covid-19, they’re able to see what public libraries have to offer, Tyler said. Many people relied on libraries that stayed open during the pandemic to apply for financial aid or for other services. The difference now is more disposable income that could come a library’s way, she said.

“Libraries across the country have begun looking outward to try to fill in those gaps in philanthropic dollars from our communities, especially for those capital investments they’ve made over the last few years,” Tyler said.

Karnatz said she believes raising the rest of the money will be a challenge, but she’s optimistic. It will probably take another two to three years, she said.

“The community loves its library,” Karnatz said. “I hold out hope and faith that as we introduce the library to new people, that it will pull at their heart strings. They will see the mission, and they will want to contribute.”

There are about 40 city, county or regional library systems that have their own property tax levy, according to information from the Arkansas Library Association. The system with the highest millage rate is the Pine Bluff Jefferson County Library System at 4.6 mills, according to a November Arkansas Democrat-Gazette story.

Fort Smith’s library receives revenue from a 1-mill property tax, said Jennifer Goodson, library director. An election was held in 2014 to increase the millage to 3 mills, but voters rejected the proposal.

Bentonville’s library is a city department and does not have its own property tax levy. However, it receives money from the city’s sales tax revenue and property tax collections. A planned expansion of the Bentonville library is being paid for through a portion of a $266 million bond referendum city voters supported a year ago, as well as through private donations, said Hadi Dudley, the library’s director. 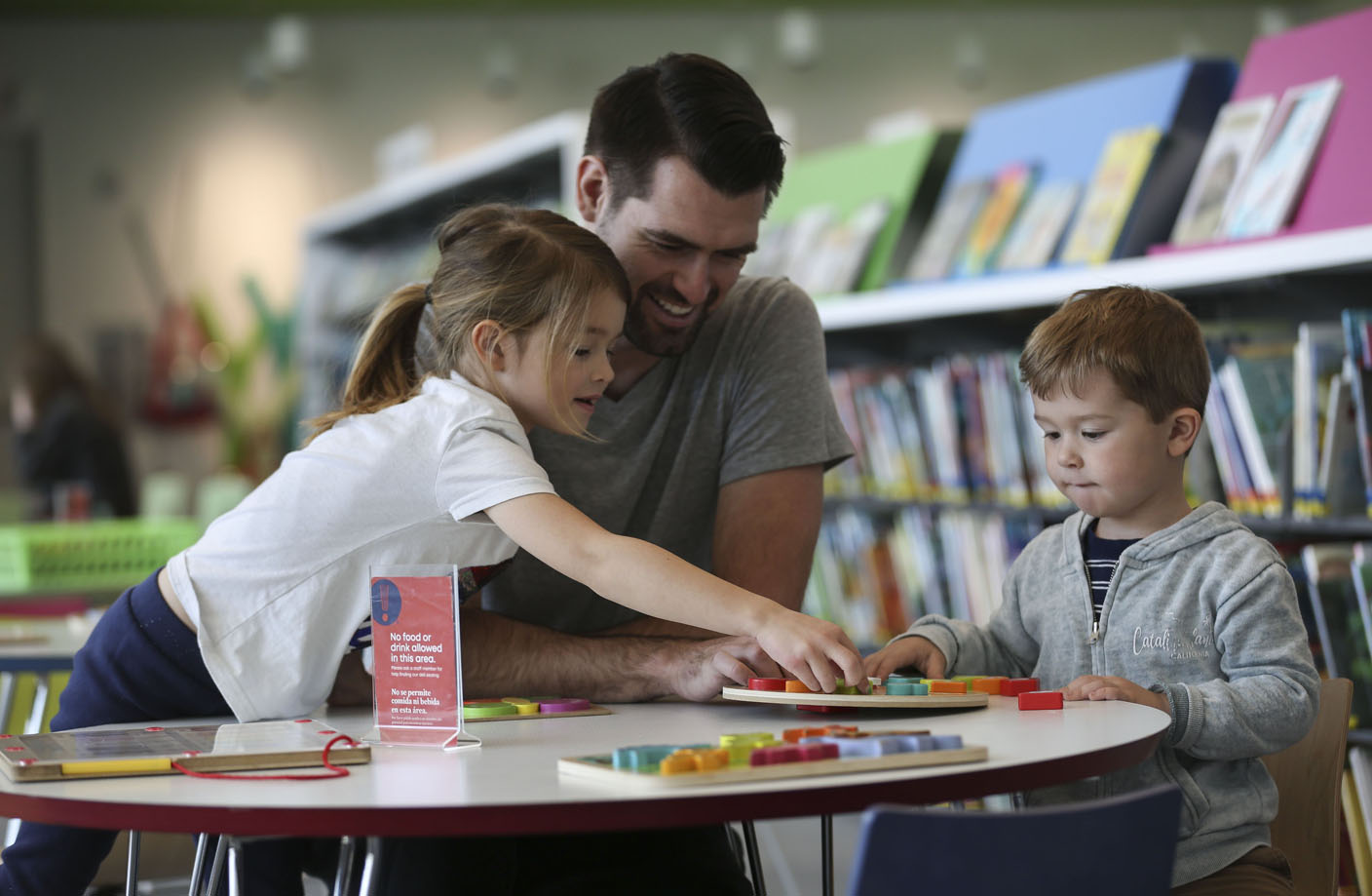 Aurora McCready, 5, (from left) Ian McCready and Aidan McCready, 3, put together a puzzle, Saturday, April 9, 2022 at the Fayetteville Library expansion in Fayetteville. The Fayetteville library is shifting its fundraising strategy to smaller donations to finish out the rest of money they need to pay for the expansion. Check out nwaonline.com/220410Daily/ and nwadg.com/photos for a photo gallery. (NWA Democrat-Gazette/Charlie Kaijo) 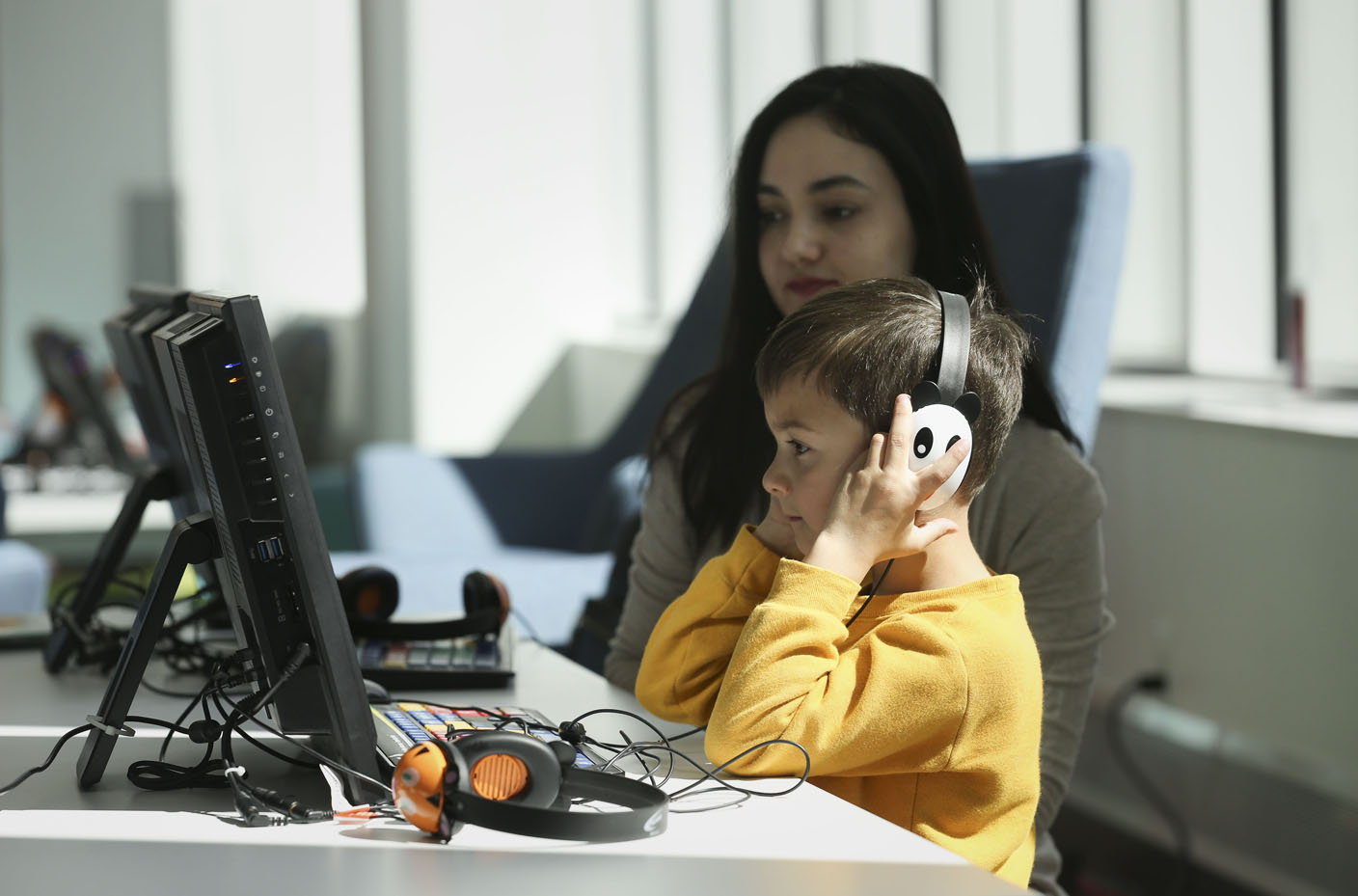 Teresa Garcia and Benton Moore, 5, (foreground) use a computer, Saturday, April 9, 2022 at the Fayetteville Library expansion in Fayetteville. The Fayetteville library is shifting its fundraising strategy to smaller donations to finish out the rest of money they need to pay for the expansion. Check out nwaonline.com/220410Daily/ and nwadg.com/photos for a photo gallery. (NWA Democrat-Gazette/Charlie Kaijo) 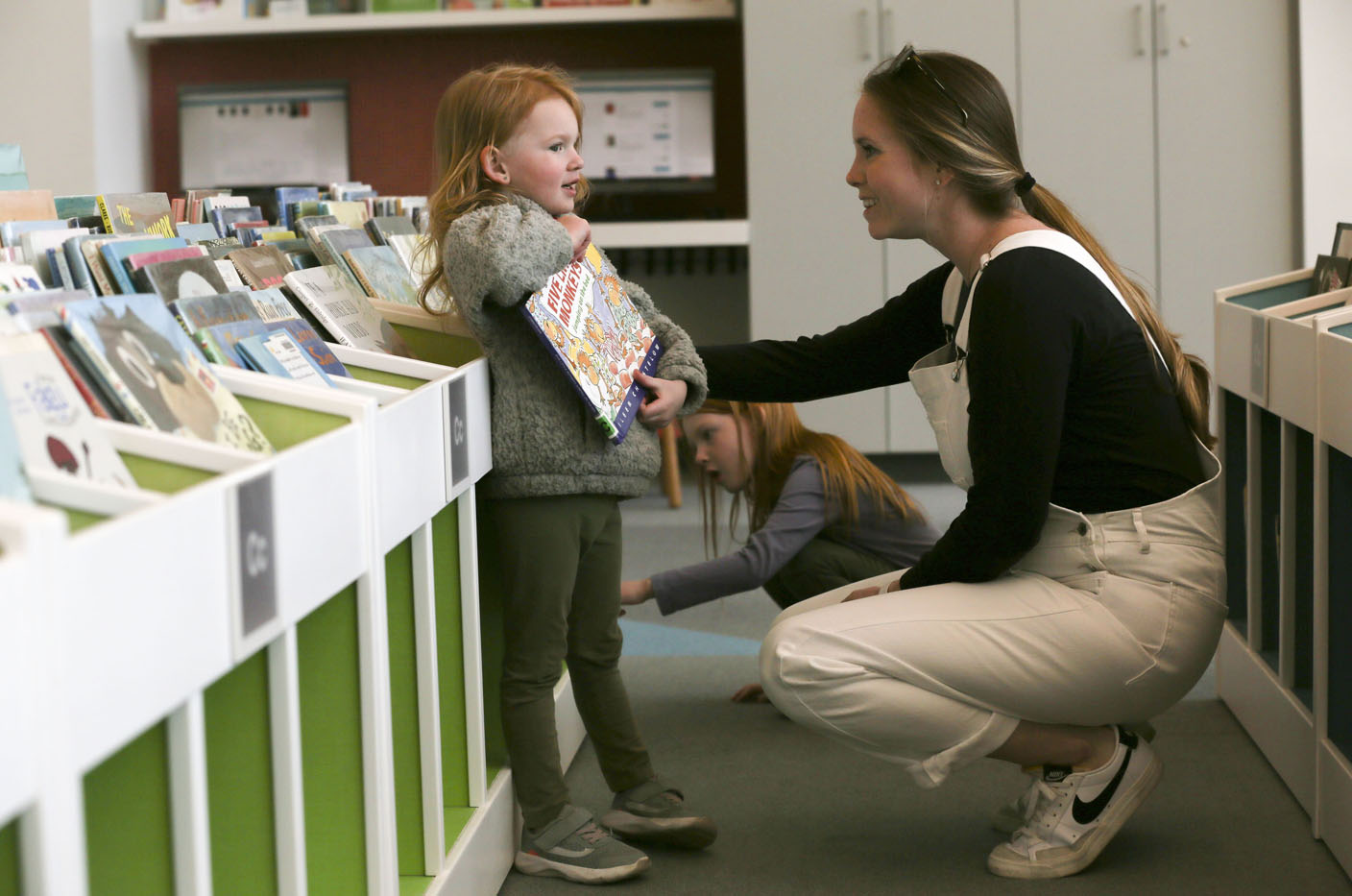 Maya Evans, 3, (from left) shows a book to Emily Evans of Fayetteville, Saturday, April 9, 2022 at the Fayetteville Library expansion in Fayetteville. The Fayetteville library is shifting its fundraising strategy to smaller donations to finish out the rest of money they need to pay for the expansion. Check out nwaonline.com/220410Daily/ and nwadg.com/photos for a photo gallery. (NWA Democrat-Gazette/Charlie Kaijo) 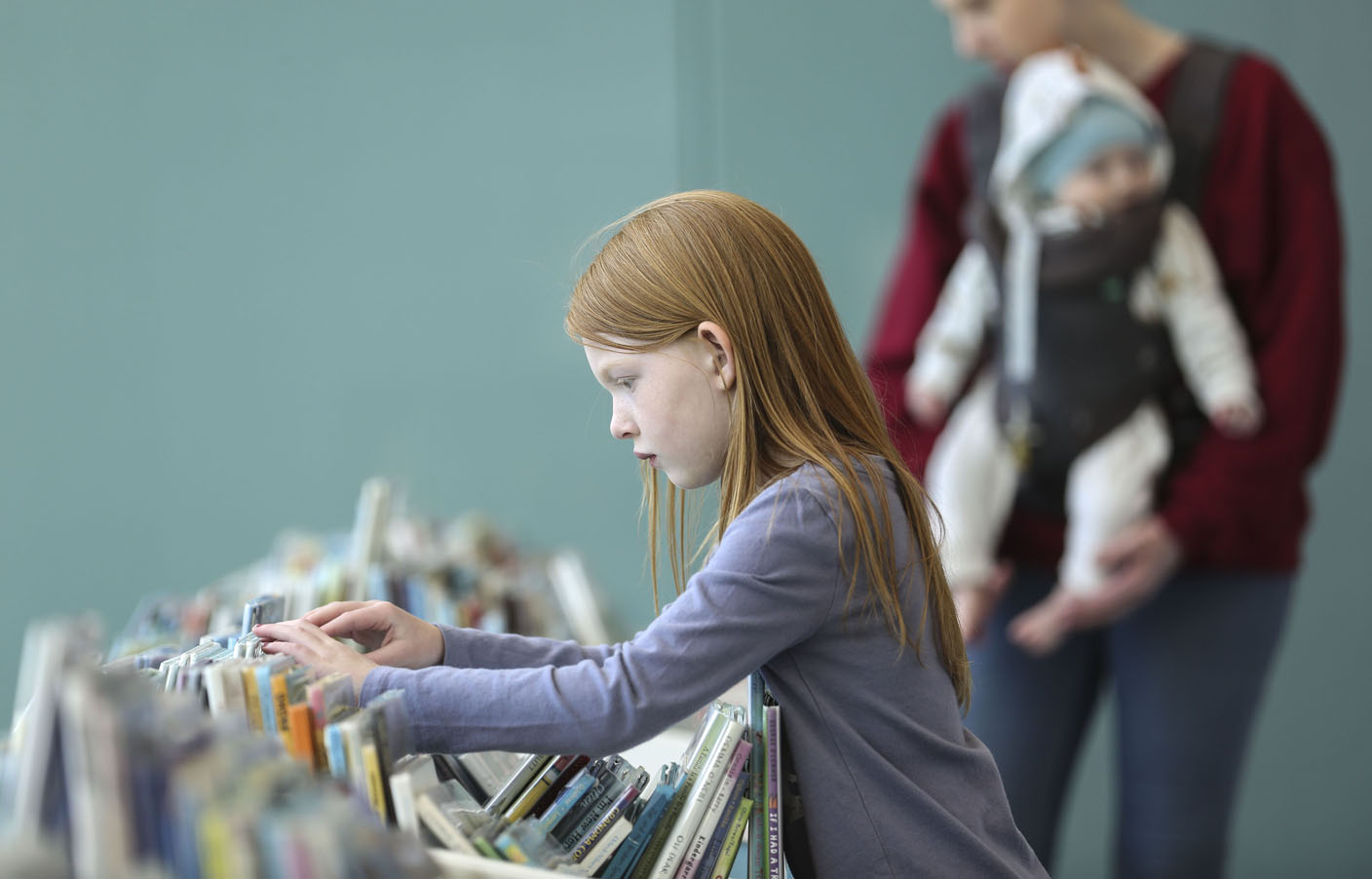 Ruby Evans, 6, looks for a book, Saturday, April 9, 2022 at the Fayetteville Library expansion in Fayetteville. The Fayetteville library is shifting its fundraising strategy to smaller donations to finish out the rest of money they need to pay for the expansion. Check out nwaonline.com/220410Daily/ and nwadg.com/photos for a photo gallery. (NWA Democrat-Gazette/Charlie Kaijo)

For more information on the Fayetteville Public Library, including how to contribute, go to:

TYLER, Texas – A chilly morning turned into a beautiful day on the water in East Texas Saturday, but it was still a tough day of fishing for anglers on a stingy Lake Palestine at the third-annual General Tire Heavy Hitters Presented by Bass Pro Shops. After Day 1 of...