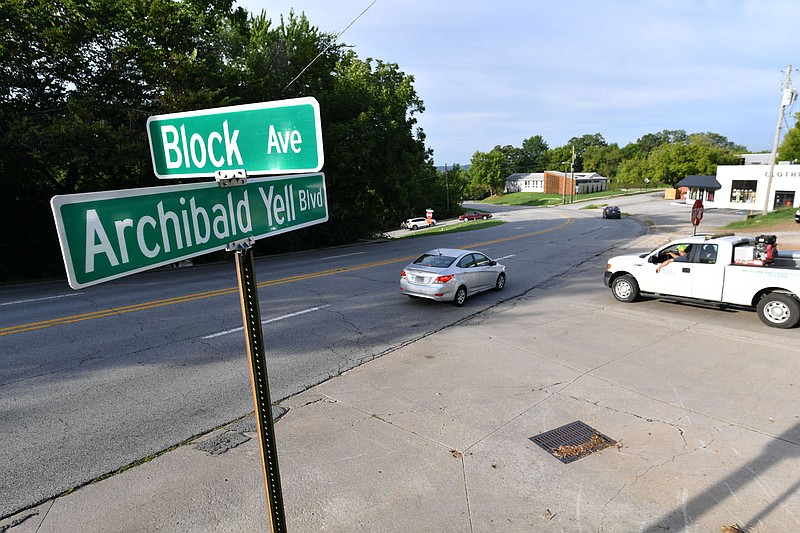 Traffic passes Sept. 1 along Archibald Yell Boulevard in Fayetteville. The City Council on Tuesday voted 7-1 to rename Archibald Yell Boulevard to Nelson Hackett Boulevard. Hackett escaped slavery and fled to Canada in 1841 but was the first and only person extradited back to the United States, prompting the British government to make extradition of those fleeing slavery to Canada nearly impossible. (NWA Democrat-Gazette/Andy Shupe)

FAYETTEVILLE — Archibald Yell Boulevard will be renamed Nelson Hackett Boulevard by next Juneteenth.

The City Council voted 7-1 Tuesday to rename the street. It was the second time the council had taken up the proposal.

Hackett was an enslaved man who fled Fayetteville in 1841 seeking freedom, making his way to Canada, according to Michael Pierce, associate history professor at the University of Arkansas, Fayetteville. The man who claimed to own Hackett demanded extradition.

Yell, who served as Arkansas governor at the time, wrote a letter to the colonial governor of Canada requesting Hackett be returned. The request was granted.

Hackett was brought back to Fayetteville in summer 1842. He was publicly whipped several times, tortured and sold back into slavery in Texas, according to Pierce’s research. He escaped again, and his fate remains unknown.

Abolitionists worried slave owners could have used accusations of theft or other offenses to extradite enslaved people. The British government subsequently made laws preventing such extradition, according to Pierce’s research.

The city is in the middle of a project to repave Archibald Yell Boulevard, overhaul the intersection with Rock Street and College Avenue and reduce traffic to three lanes. Crews also will install a traffic signal at South Street and add pedestrian crossings. Work is scheduled to wrap in February.

Council member D’Andre Jones sponsored the renaming measure, saying it was not about erasing history or appeasing “woke” culture. The move falls in line with the city’s commitment to diversity, equity and inclusion, he said.

An amendment the council approved 8-0 will have the name change take effect June 19, the federal holiday commemorating the freedom of enslaved people in the United States after the Civil War.

Four people spoke during the public comment portion of the item, with three expressing support and one saying it would erase history.

Former council member Sarah Marsh said the renaming and ongoing work on the street will help knit that section of town socially and physically.

“Archibald Yell Boulevard is a physical manifestation of racist urban planning policies,” she said. “We have a responsibility to fix this.”

Attorney Joey McCutchen of Fort Smith said he viewed replacing the name as divisive and exclusive. He suggested renaming an intersecting street for Hackett because his and Yell’s lives intersected in history.

“We’re for all history here,” McCutchen said. “But it shouldn’t be told at the expense of erasing the accomplishments of Archibald Yell.”

Council member Mike Wiederkehr cast the sole no vote. He said he had no issue with naming the street after Hackett but felt the proposal presented an all-or-nothing situation pitting people of different perspectives against one another.

“We can arrive at a good thing, but there are challenges to the way we arrived at it,” Wiederkehr said. “Everyone matters, or no one matters.”

Council member Sloan Scroggin suggested adding an amendment that would reimburse business owners for expenses related to changing the street name. He rescinded the amendment after administrators and other council members raised questions over a potential dollar amount and what specific expenses would be addressed.

Mayor Lioneld Jordan said he would have supported the name change if the council vote ended in a tie. He said he never had any doubt about whether to support it.

In other business, the council voted 7-0 to support spending $557,298 in leftover Coronavirus Aid, Relief and Economic Security Act funds. Scroggin recused from the vote.

The money will be split between the University of Arkansas for Medical Sciences and Community Clinic. UAMS will receive $483,430 for a mobile wellness unit to specifically serve the city, while Community Clinic will get $73,868 to buy equipment and supplies related to covid-19 at the clinic’s locations in the city.

Additionally, the council voted 5-3 to hold until Oct. 4 a $212,257 proposed contract with Miller Boskus Lack Architects to come up with optional, preapproved designs for homes. Council member Teresa Turk said she wanted more information on similar programs in other cities and also expressed concern over the dollar amount of the contract.