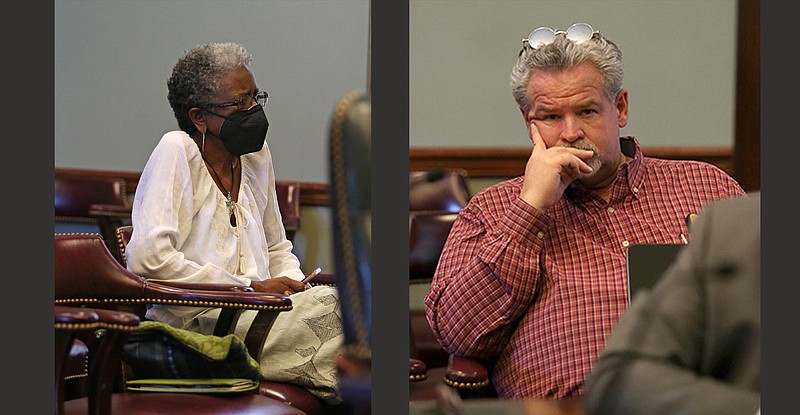 The committee’s action came after the panel found that Flowers has not violated any provisions of the Senate’s ethics rules and recommended that the Senate uphold the committee’s finding and not impose any penalties against Flowers because the committee found the issue at hand to be “clerical only.”

Senate President Pro Tempore Jimmy Hickey, R-Texarkana, said he plans on calling for the Senate to meet next Friday to consider the Ethics Committee’s recommendations, after a meeting of the Arkansas Legislative Council.

After the Senate committee’s actions, Clark told reporters “I think they are mistaken.

“I would rather defend my position than theirs when the public learns all of the facts,” he said.

On Aug. 18, Clark filed an ethics complaint against Flowers alleging that she violated the Senate’s code of ethics by accepting legislative per diem payments for participating by Zoom in the Senate’s regular session meetings in 2021.

In its 18-page report to the Senate released late Friday afternoon, the Senate Ethics Committee said Flowers contacted the Senate staff as soon as she became aware in the 2021 regular session of the deposits in her bank account that she felt had been made in error, and she was assured by Senate staff that she was entitled to the payments she received.

The ethics committee said it’s the committee’s belief and determination that “clerical errors occurred” in dealing with the unprecedented circumstances of conducting a legislative session during the covid-19 pandemic, which included wholly new procedures and scenarios such as remote participation by senators.

“While regrettable, the clerical errors were understandable and resulted in the unintentional overpayments of reimbursements to senators, including Senator Flowers,” the committee said.

Last month, Hickey said he learned from the Senate staff as a result of Clark’s inquiries about legislative expense reimbursements that Sen. Trent Garner, R-El Dorado, and Flowers, who participated in the Senate’s meetings through Zoom during the 2021 regular session, were each incorrectly paid per diem.

“I personally looked at it as a clerical error,” Hickey said when nearly a month ago asked why he didn’t file an ethics complaint against Flowers.

In a check dated Sept. 1, Garner reimbursed the Senate $906, according to Senate records. “Zoom” was written on the check.

Asked why he didn’t file a complaint against Garner, Clark told reporters that he received a tip about Flowers collecting reimbursements for participating in meetings by Zoom but not a tip about Garner.

“When I was made aware [about Garner], I said there are other things ethics charges that could be filed on and, in order for me to justify filing ethics charges on Senator Garner, I would have to file a number of other ethics charges that I think are more serious than the four days that he was paid, and I don’t want to file …,” he said.

Clark said Friday that the evidence will show without a doubt that Flowers knew what the rules were and shows that Flowers questioned other senators being paid per diem for attending legislative meetings by Zoom.

“There was no action taken by anyone until I discovered it,” he said.

Clark told reporters he believes Flowers should repay roughly $3,000 more to the Senate for legislative reimbursements that she was paid during the 2021 regular session.

Flowers could not be reached for comment by telephone or email Friday afternoon.

Senate Secretary/Director Ann Cornwell said she believes Clark is referring to per diem and mileage paid to Flowers, as well as other lawmakers, for certain days in which the the Legislature didn’t meet in session.

Flowers is an attorney. Clark is a businessman. They have clashed at times in the Senate.

In its report, the committee said Clark’s allegations against Flowers did not have merit, Clark made repeated public statements regarding his intent to retaliate against the Senate, and Clark’s investigation of the facts before filing his ethics complaint against Flower was reckless with deliberate intent.

The evidence demonstrates Clark singled out Flowers for an ethics complaint and his stated reason for filing his complaint was “untrue,” the Senate Ethics Committee said.

The committee said “the only purpose to the filing of the [complaint] and any that he has plans to file going forward, seems to be to fulfill his promise on July 3 to ‘burn the house down.’

“The committee feels it is worth noting that his absolute disregard for the number of Senate staff hours that must be engaged in responding to the information requests and preparation of financial information related to multiple ethics violations constitutes a waste of valuable staff time and Senate resources,” the Senate Ethics Committee said.

The committee also understands the serious nature of any allegation made and takes its responsibilities in a thoughtful, measured and bipartisan manner, the committee said.

“However, the committee cannot allow this process to be used in a manner that is retaliatory and these types of meritless petitions will not be tolerated,” the Senate committee said.

“These frivolous and and spurious allegations only serve to create a divisive environment within the Senate and bring dishonor to the institution of the Senate.”

Clark said his ethics complaint against Flowers “is not personal,” and the complaint involved something he considered to be egregious.

He said his ethics complaint wasn’t intended to be retaliatory against the Senate.

The committee also recommended the Senate punish Clark by suspending him for the remainder of the 93rd General Assembly, including the loss of reimbursement for conference registration fees or travel reimbursements related to in-state or out-of-state travel; attendance and participation at legislative committee meetings or Senate meetings, with the exception of any Senate organizational or Senate orientation meetings for the 94th General Assembly, including access to the member and staff only areas of committee rooms and facilities; and access to and use of the Senate, the Bureau of Legislative Research, Legislative Audit and other legislative facilities, equipment or staff resources, including his Senate email account.

Clark is running unopposed for his District 7 seat.

In June of 2018, the Senate overhauled its ethics rules at the urging Sen. Jim Hendren of Sulphur Springs after federal investigations in the previous few years led to the convictions of several former state lawmakers.

The state Senate overhauled its rules to create a committee on ethics, prohibit senators from certain activities involving conflicts of interest and require more disclosure of other conflicts and their personal finances. In June of 2018, Clark was the only audible dissenter to the Senate’s overhauled ethics rules, saying he agreed with most of the revised rules but he believed the changes were rushed through.

Under these revised ethics rules, Garner filed the first ethics complaint and Hendren was the target of the complaint. In November 2020, the state Senate initially dismissed Garner’s ethics complaint against Hendren as frivolous.

The Senate Ethics Committee later held a closed hearing on Garner’s complaint and recommended the Senate dismiss the complaint before Garner withdrew the complaint.

Hendren on Friday praised the ethics committee’s recommendations regarding Clark’s complaint against Flowers.

“During our adoption of our new Senate ethics rules, I warned that we must not allow ethics complaints to become weaponized,” he tweeted. “The first ethics complaint ever filed was exactly that. So was this one.

“Glad the ethics committee is sending a message — a clear message.”

On June 15 of this year, Hickey filed the second and third ethics complaints against state senators under these revised ethics rules.

He filed an ethics complaint against Sen. Mark Johnson, R-Ferndale, for Johnson signing in Clark’s name on the sign-in sheet for reimbursement at the Senate Boys State committee meeting June 3 that Clark didn’t attend. He also filed a complaint against Clark for asking Johnson to seek reimbursement from public funds for Clark for that meeting. The Senate didn’t pay the $155 per diem to Clark for that meeting at the behest of Senate leaders.

For violating the ethics rule, the Senate’s punishment for Clark on July 21 was to strip him of his committee chairman and vice chairman posts and block his eligibility for per diem and mileage reimbursement for the rest of this year. He also was reprimanded by the Senate, and future Senate president pro tempores are not to consider Clark for appointment to serve on Boys State, Girls State or the Senate Ethics Committee.

Is The Pandemic Over? Pre-Covid Activities Americans Are (And Are Not) Resuming.

Biden says the pandemic is over — and when it comes to casinos, concerts and cosmetic procedures, Americans seem to agree. For theater, therapy and funerals though, not so much.September 24, 2022 at 6:00 a.m. EDTOCEAN CITY, MARYLAND - AUGUST 27: Visitors enjoy their time at Seacrets, a Jamaican-style waterfront...

Fort Smith, AR Ranks As One Of The Poorest Big Cities In The Country

Large cities and metropolitan areas have long been hubs of economic activity and prosperity in the United States. Large employers that can pay enough to attract top talent from around the country often have operations in places like Austin, Chicago, New York, and San Francisco. As a result, these cities,...

ROGERS -- The continued gain of confidence for junior quarterback Dane Williams has been noticeable with each game for Rogers Coach Chad Harbison.Williams' growth as a first-year starting quarterback continued Friday night in perhaps his best performance this season. He finished with four total touchdowns to lead the way in...