Colonization: China Claims Parts Of India, Renames Them In Mandarin

The Chinese government propaganda newspaper Global Times announced on Thursday that China’s Ministry of Civil Affairs had renamed 15 locations in Arunachal Pradesh, which it referred to as “Zangnan (the southern part of China’s Xizang [Tibet]).” China has no authority to rename locations in India or any other country.

“It is a legitimate move and China’s sovereign right to give them standardized names. More standardized place names in the region will be announced in the future,” a Chinese “expert” told the Global Times. The propaganda newspaper listed rivers, mountains, and “residential areas” among the places newly christened names in Mandarin, the language of the Han ethnic group of eastern China. The Han people are not native to western China or India.

The Global Times acknowledged that the Indian locations in question already had names, but dismissed them as “illegal names” in territories “illegally occupied by India.” 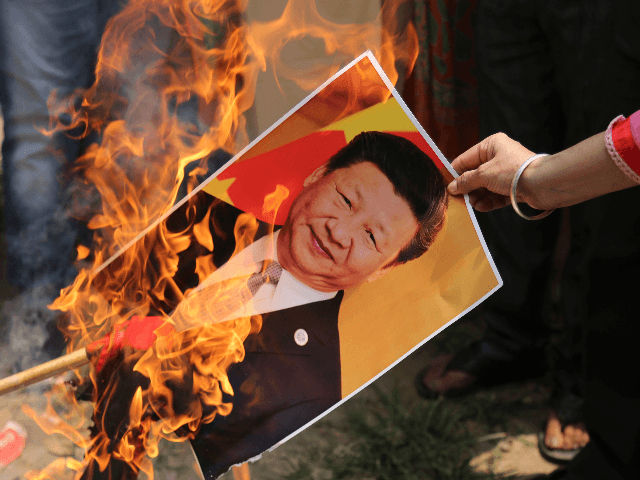 China contests Indian control over a large portion of eastern India bordering the occupied regions of Tibet and Xinjiang, including much of Arunachal Pradesh and Ladakh, a separate region bordering China. As it has in the past, the Indian government dismissed China’s “invented” names and asserted that the areas in dispute unquestioningly belong to India.

“Arunachal Pradesh has always been, and will always be, an integral part of India. Assigning invented names to places in Arunachal Pradesh does not alter this fact,” the Indian government asserted. A day later, the governor of Arunachal Pradesh, B.D. Mishra, and fellow governor of Assam Jagdish Mukhi spent New Year’s Eve along the border between India and China, visiting border soldiers and locals in India’s easternmost village.

Indian outlets interpreted the visit as an assertion of sovereignty following the declaration of Mandarin names for much of the area.

?China’s national flag rise over Galwan Valley on the New Year Day of 2022.

This national flag is very special since it once flew over Tiananmen Square in Beijing. pic.twitter.com/fBzN0I4mCi

The Times of India noted on Monday that China had announced a similar move renaming Indian territories previously – in 2017, immediately after the Dalai Lama visited Arunachal Pradesh. The Dalai Lama is the head of Tibetan Buddhism and has lived in exile in India for decades as a result of China’s persecution of the faith. The Communist Party considers the Dalai Lama a terrorist akin to the Islamic State, despite the religious leader’s lack of any history of violent activity.

“This deserves to be seen in the context of the Chinese sinister design to first assign Chinese names to geographical entities, then launch propaganda that historically these places belonged to China and then lay claims over them and finally occupy them,” the Indian newspaper noted, adding the context that Beijing similarly renamed parts of the Philippines and Vietnam in the South China Sea in 2020 – territories the Permanent Court of Arbitration at the Hague ruled in 2016 did not belong to China.

“The renaming of places is a part of the Chinese mischief to claim these geographical entities, which include eight residential areas, four mountains, two rivers, and a mountain pass as per the CPC’s mouth-piece Global Times,” the Times of India concluded. “While these do not materially impact on India, it is a challenge to India’s sovereignty and integrity.”

Writing for the Hindustan Times, Shishir Gupta similarly asserted on Monday that China unilaterally renaming parts of India “is part of the same psychological warfare designed to keep [Indian Prime Minister] Narendra Modi government on tenterhooks and declare a new normal of Beijing’s strategy on boundary resolution.” Gupta noted that the Chinese Embassy in India “virtually threatened” Indian lawmakers last month who visited with leaders of the Tibetan Government-in-Exile and has increased attempts to bully India out of supporting the Dalai Lama. 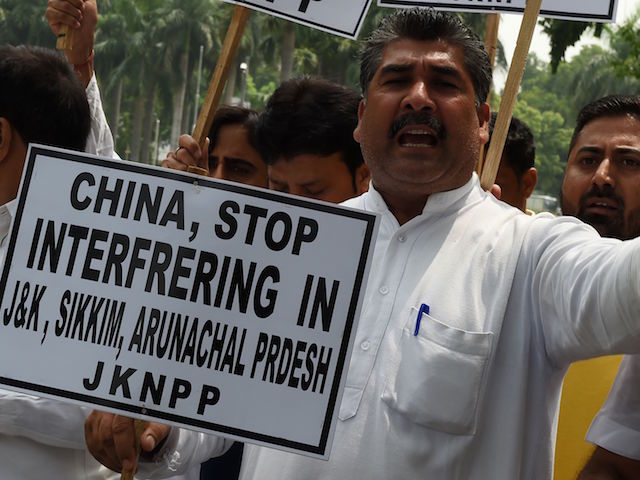 Indian activists of the Jammu and Kashmir National Panthers Party protest outside the Chinese embassy in New Delhi on July 7, 2017, in the wake of border tensions between the neighbouring countries. (MONEY SHARMA/AFP/Getty Images)

Much of the popular reaction in India to China’s new names was mockery. The Indian site OpIndia noted that users of Twitter responded to the new names by Hindifying the names of Chinese locations, including renaming Guangzhou as “Ghanta Ghar,” Shanghai as Shambhunagar, and Tiananmen Square as “Tank Chowk,” after the iconic photo from the 1989 massacre there.

China has been attempting to colonize Arunachal Pradesh for years. The construction of artificial Chinese villages in the area – including significant building on the side that India does not contest is Chinese – has increasingly raised alarm in the Indian government throughout the past year, however. The Indian government insisted recently that many of these new villages were not violating the Indian border.

“They are building this infrastructure, [these] kind of so-called villages, which are well within their side of the LAC. They have not transgressed anywhere on our perception of the LAC,” the head of India’s armed forces at the time, Indian Gen. Bipin Rawat, said in November. Rawat died in a mysterious helicopter accident last month.

Mitch McConnell explains why he will still support Donald Trump Two lawyers who served at the most senior level in the Trump White House are today set to talk to the committee investigating events leading up to the 6 January insurrection. Former White House counsel Pat Cipollone and his onetime...

New Zealand Court Rules Suspect Can Be Extradited To China

WELLINGTON, New Zealand (AP) — New Zealand’s top court on Wednesday ruled a man can be extradited to China to face a murder charge — a landmark judgment that goes against the trend set by most democratic nations.In a 3-2 decision, the Supreme Court found that China was able to...

Vladimir Putin has sent almost 100,000 Ukrainian refugees thousands of miles away from their home, to resettle in remote corners of Russia, including Siberia and the Arctic Circle, according to Kremlin documents. Moscow made the emergency order last month to move 95,739 people of the Russian Federation, Ukraine, Donetsk, and...

NewsWorldAmericasUS politicsRoy P Disney, great-nephew of Walt, says equality matters to the family(Related) Florida official claims Disney ‘bullying’ Republicans over ‘Don’t Say Gay’ billAn heir to the Disney fortune who publicly came out as trans recently has said they should have done more to speak out against Florida‘s “Don’t Say...