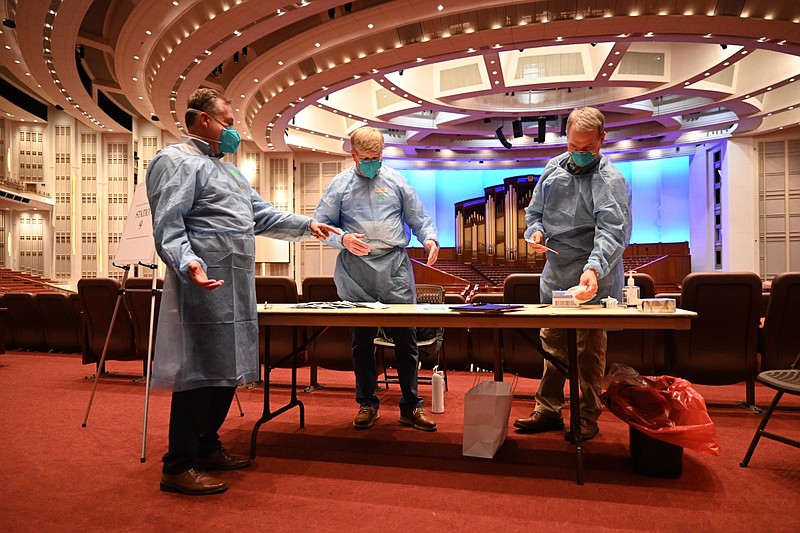 Health care workers prepare to administer COVID-19 tests on members of the Tabernacle Choir and members of the media on Tuesday, September 21, 2021, in the Conference Center in Salt Lake City, Utah, leading up to the iconic Latter-day Saint music group?s first in-person rehearsal since the beginning of the pandemic. Courtesy of the Church of Jesus Christ of Latter-day Saints.

Two years after covid-19 silenced them, church choirs across the country are eagerly breaking into song once again.

That’s the case in Salt Lake City, where the Tabernacle Choir at Temple Square is busy rehearsing for a major church conference.

Over at First Presbyterian Church in Jonesboro, the choir has performed for the past two Sundays, though it’s not yet back to full strength. They’ll sing the “Hallelujah Chorus” on Easter Sunday, music director Day Arnoult said, if enough people return.

Low turnout isn’t a problem for the world-famous Salt Lake ensemble, which was known, prior to 2018, as the Mormon Tabernacle Choir.

Affiliated with the Church of Jesus Christ of Latter-day Saints, it has more members (393) than seats (364) in its conference center choir loft.

In March 2020, when a national health emergency was declared, the choir stopped gathering.

“We were hoping it would be a short pause. And, as you know, it turned out to be a very long pause,” said Dr. David Palmer, an ears, nose and throat doctor and the choir’s medical director.

For 18 months, choir members were unable to gather.

Before practices finally resumed six months ago, the choir put in place a number of policies designed to minimize the risk of covid-19 transmission.

“It’s called the Swiss cheese model of public health,” Palmer said. “[With] Swiss cheese, every slice has holes in it. But if you have enough slices stacked together, you can mitigate and lessen the impact of an epidemic or a pandemic.”

The second slice was mandatory testing. Every choir member had to be tested for covid before every choir practice or performance. With covid numbers dropping, that requirement was suspended earlier this month.

Social distancing was yet another. When the choir performed at the church’s October General Conference, only about half of its members sang, increasing the space between the singers.

Members with compromised immune systems or with health-challenged family members were given special leave; members with even the sniffles were told to stay home. Masks were warn except when actual singing was taking place, and rehearsals were held in well-ventilated rooms.

Vaccination status was not grounds for dismissal from the choir.

“We didn’t kick them out,” Palmer said. “It was a requirement for performance but not membership.”

The strategy proved effective, a forthcoming study will show.

“I have a member of the choir, who was also an epidemiologist who was very interested in studying the choir members’ possible transmission. It hasn’t been published yet, but I can tell you that we did not find a single instance of transmission from one choir member to another or orchestra member in the entire time that we studied, which was in the fall of last year,” Palmer said.

“I personally think that’s more than luck. I think maybe somebody upstairs was looking down on us and protecting us,” he said.

Early on in the pandemic, choir practices were portrayed as potential super-spreader events. At a gathering of the Skagit Valley Chorale, north of Seattle, 52 of 61 people reportedly had confirmed or probable cases of covid after attending a practice in March 2020.

Similar tales came in from overseas.

Given the warnings, choirs across the country shut down.

At St. Mark Baptist Church, it wasn’t just the choir loft that was empty. It was the pews as well.

Other than a brief period in November 2021, in-person worship was suspended from March 2020 until earlier this month, according to Darius Nelson, the church’s pastor of music and arts.

“I think everybody understood and everybody knew we were trying to be as safe as possible,” he said.

After performing with smaller ensembles in an empty sanctuary, Nelson is glad to finally have his choir returning.

“I’ve got a good 30, 35 [people],” he said. “The ones that want to come back have come back and those who are still a little bit leery are staying back.”

When you go that long without practicing, there are consequences.

“People have forgotten songs. There’s a little rustiness. But it’s kind of like riding a bike; once you get back up there, you know, you can kind of do it again.”

In a worship setting, the songs are extremely important, Nelson said.

“People go through so much, especially in these seasons where people are dealing with the mental strains of new life or loss of life or recovery,” he said. “The music is kind of like a balm. It kind of heals people. It gives people some kind of solace or some encouragement. That’s kind of how I sum up what the worship music does.”

Arnoult, the music director from Jonesboro, says she sang more than her share of solos while the choir was away.

“It’s much better to have the choir sing the hymns and anthems,” she said.

To combat covid, the church switched for a time to online-only worship. Later, it added tailgate worship services, inviting people to bring their favorite lawn chairs and worship in the parking lot.

Even outside, worshippers were supposed to wear a mask; every other parking space was supposed to remain empty.

To lessen the chance of transmission, social distancing and other strategies remain in place; choir members are not exempt.

“They are wearing their mask during the whole service, except for during the anthem. That’s how we’re doing it at this point,” Arnoult said.

Pre-covid, the choir had 12 to 15 people. These days, it’s down a few members. Ten showed up on the first Sunday; seven on the second.

“People were scared to come back. But now that we are back, now that we are talking and trying to be more social, they actually do seem a lot happier,” Arnoult said. “After choir practice, they don’t leave. They want to stay in the room and they want to talk and just sit and find out how everyone is. They just are happy that we’re trying to get everything back on track.”

Churches that want to resume choir practice can do so safely, if they take the right steps, said Palmer, the Tabernacle Choir medical director.

“I would start small. I would start with distance. … If you really want to be conservative, have everyone vaccinated and boosted,” he said.

With enough Swiss cheese slices, “I think that it’s quite safe,” he said.

“We can certainly say that we had great success doing it with a large group [and] singing without masks. So if we can do it, I think just about anybody can do it,” he said.

In January, when the number of infections skyrocketed, the choir briefly suspended its practices and performances. Officials continue to keep one eye on the music and the other on the covid data.

“Dave Palmer comes to our extended choir staff meetings every Thursday, and we start out with a covid report. Even this week, we were looking at what was happening with these new variants in China and other places, reports from around the world,” Barrick said.

While covid may have derailed choir practices for 18 months, the choir itself was never silenced, Barrick noted. The number of people watching Tabernacle Choir performances actually jumped sharply during the pandemic, he said.

Choir officials are doing all they can to lower the risks of transmission, but they realize the risks can’t be eliminated entirely.