Buddy Shute Has New EP, And We Have Songs On YouTube! 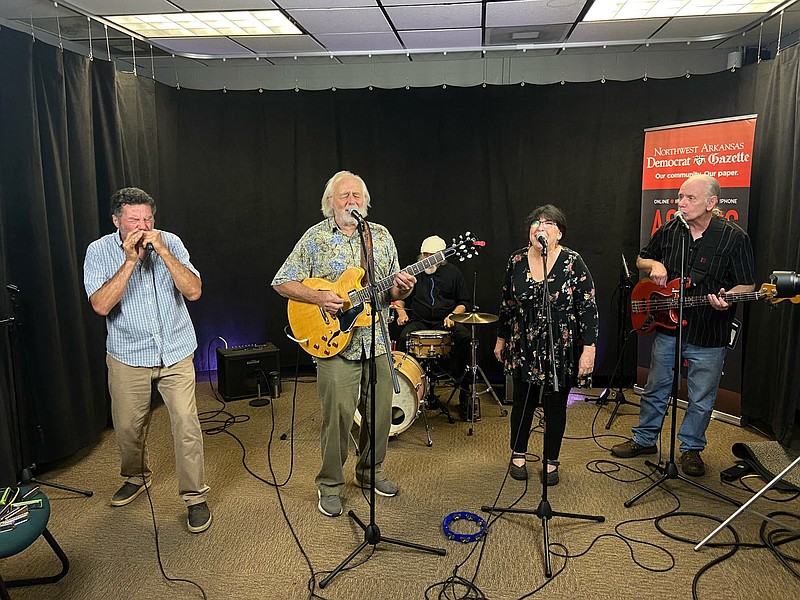 Local band Buddy Shute and the Motivators have a new EP entitled, “You Gotta Move.” The band made up of Buddy, Mark McGee, Brenda Baskin, Steve Baskin and Randy “Dobie” Reese will perform Sept. 18 at George’s Majestic Lounge in Fayetteville for an album release show. They stopped by to share a song and talk about their new songs.

Buddy Shute has been a fixture on the Northwest Arkansas blues scene for many, many years. This year he and Mark McGee (often described as the best harmonica player in the Ozarks) traveled to Memphis to represent Fort Smith in the Riverfront Blues Challenge. Shute, along with his band Buddy Shute and the Motivators — comprised of Brenda Baskin on vocals, McGee on harmonica, Steve Baskin on bass and vocals and T.J. Gates on drums — stopped by the Northwest Arkansas Democrat-Gazette podcast studio for a quick interview and a few songs from their new EP, “You Gotta Move.” Here is an excerpt from the interview with Buddy Shute.

Q. You grew up in Memphis, right? Can you tell us a little bit about growing up in the birthplace of the blues? You grew up near Sun Studios?

A. That’s right. I grew up in Memphis. … It’s described as the world’s largest small town. Memphis is a very musical place, and although I really wasn’t into blues and R&B at the time — I was only like 10 or 12 — it was available on the radio and it was everywhere. So you just couldn’t help but be influenced by it. … My father owned a car lot just a block down from the Sun Studios, and I used to play down there in the parking lot. People would come down from the studio all the time and look at the cars, and I didn’t know who they were at the time. No telling who it was!

Q. And I read that you also met Ike and Tina when you were playing in bars?

A. That was in New Orleans where I stayed for a while. We were just playing in this bar. And well, a guy got up and asked if he could sit in and I said, ‘Yeah, sure.’ And then I went over and got on bass and started playing that. [Then] the other guy got up and asked if he could play the bass and I said sure. So I went over and got another guitar and another guitar player got up … It turns out they were Ike and Tina Turner’s band. They were in town for the concert, just walking up and down on Bourbon Street.

Q. How did you find yourself in Northwest Arkansas?

A. I was in New Orleans for 10 years, and I love the place very much, but I didn’t feel like I wanted to spend the rest of my life there. So I started looking for a spot [and] this is the best spot in the country. So I ended up here.

Q. So can you tell us a little bit about your new EP, “You Gotta Move”?

A. It’s our second EP. Our first CD was “Bar-b-que.” [This one] describes the band pretty well. Everything is fairly blues-based, with all the different influences we have of R&B and such. And there are five songs on it. Four of them are originals, one of them was written by myself and Brenda. One of them is a Elton John song, [“Sorry Is the Hardest Word”]. We took that song and made it a Motivator song.

Q. The official release date is?

A. We have an official release party at George’s [Majestic Lounge] on Sunday, Sept. 18, and that’s where we will be featuring that CD. There’s a couple other CDs we’ve been promoting [that will be for sale]. Then also it’s going to be a birthday party. Brenda’s birthday is the 18th. And mine is just a couple days before, so we’re going to have some cake.