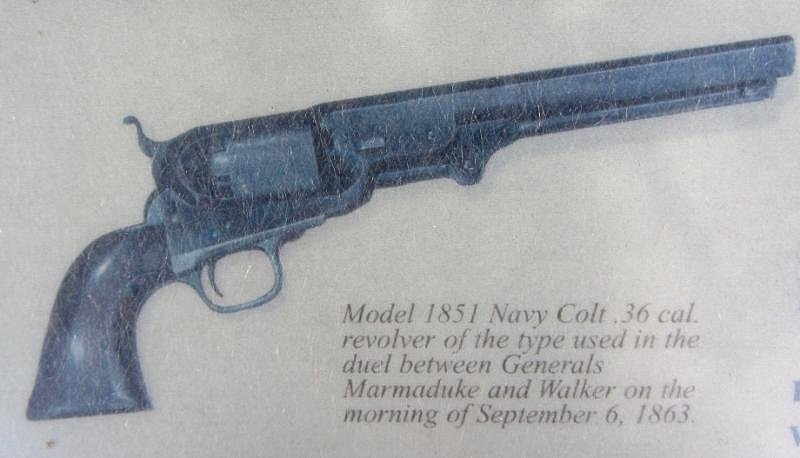 A Navy Colt .36-caliber pistol fired the killing shot in the duel on Sept. 6, 1863. (Special to the Democrat-Gazette/Marcia Schnedler)

One of the last public duels in Arkansas took place 159 years ago today on the eastern fringe of what is now North Little Rock.

The site where Marmaduke fatally shot Walker on Sept. 6, 1863, is one of the historic locations marked on the Little Rock Civil War Campaign Trail, which traces the fighting that finally assured Union dominance of the state. That driving tour is among eight Arkansas Civil War Heritage Trails described at arkansasheritagetrails.com/Civil-War/.

Visitors can see the duel’s detailed information sign shaded by foliage along U.S. 165 just east of its intersection with U.S. 70 (East Broadway). Illustrations depict the event. A full-color drawing shows Walker falling to the ground after Marmaduke’s bullet struck. Also pictured are both generals, along with the Navy Colt .36-caliber revolver fired by the men.

According to the sign, “The duel grew from Marmaduke’s allegation that Walker had failed to support him in the July 4, 1863, Battle of Helena and the Aug. 27, 1863, Battle of Reed’s Bridge. … At the command ‘fire,’ they simultaneously discharged their weapons without effect. Marmaduke fired again, striking Walker in the right side and mortally wounding him.” 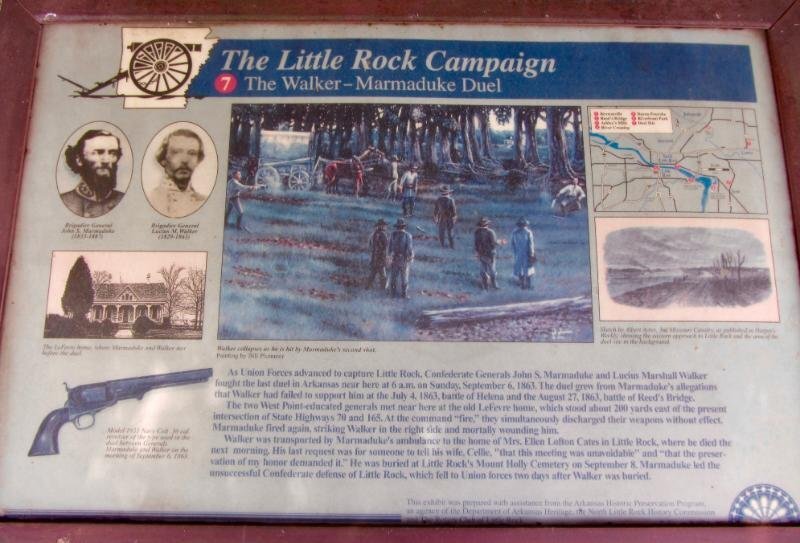 A panel describes the duel between two Confederate generals on Sept. 6, 1863. (Special to the Democrat-Gazette/Marcia Schnedler)
The Encyclopedia of Arkansas (encyclopediaofarkansas.net) entry titled “Marmaduke-Walker Duel” provides these details:

“Marmaduke faced arrest and imprisonment under the 1820 Arkansas law prohibiting duels. After being placed under arrest, he was soon released so as not to create more animosity amongst the troops.” He “never faced charges but felt great remorse for his actions. … He went on to be elected governor of Missouri in 1884 and died in 1887.”

Helpful background for the driving tour is displayed at the MacArthur Museum of Arkansas Military History in Little Rock’s MacArthur Park. Three galleries in the free-admission museum relate the state’s Civil War experience, including the Union drive on Little Rock.

Some tour sites consist of just an explanatory plaque. But the most evocative location is Reed’s Bridge at Bayou Meto, along Arkansas 161 southeast of downtown Jacksonville. A replica of a Civil War cannon stands near the parking area, while four signs lead visitors onto a grassy field where hard fighting took place on Aug. 27, 1863. On that day, Rebel troops temporarily held the line against a larger Union force. 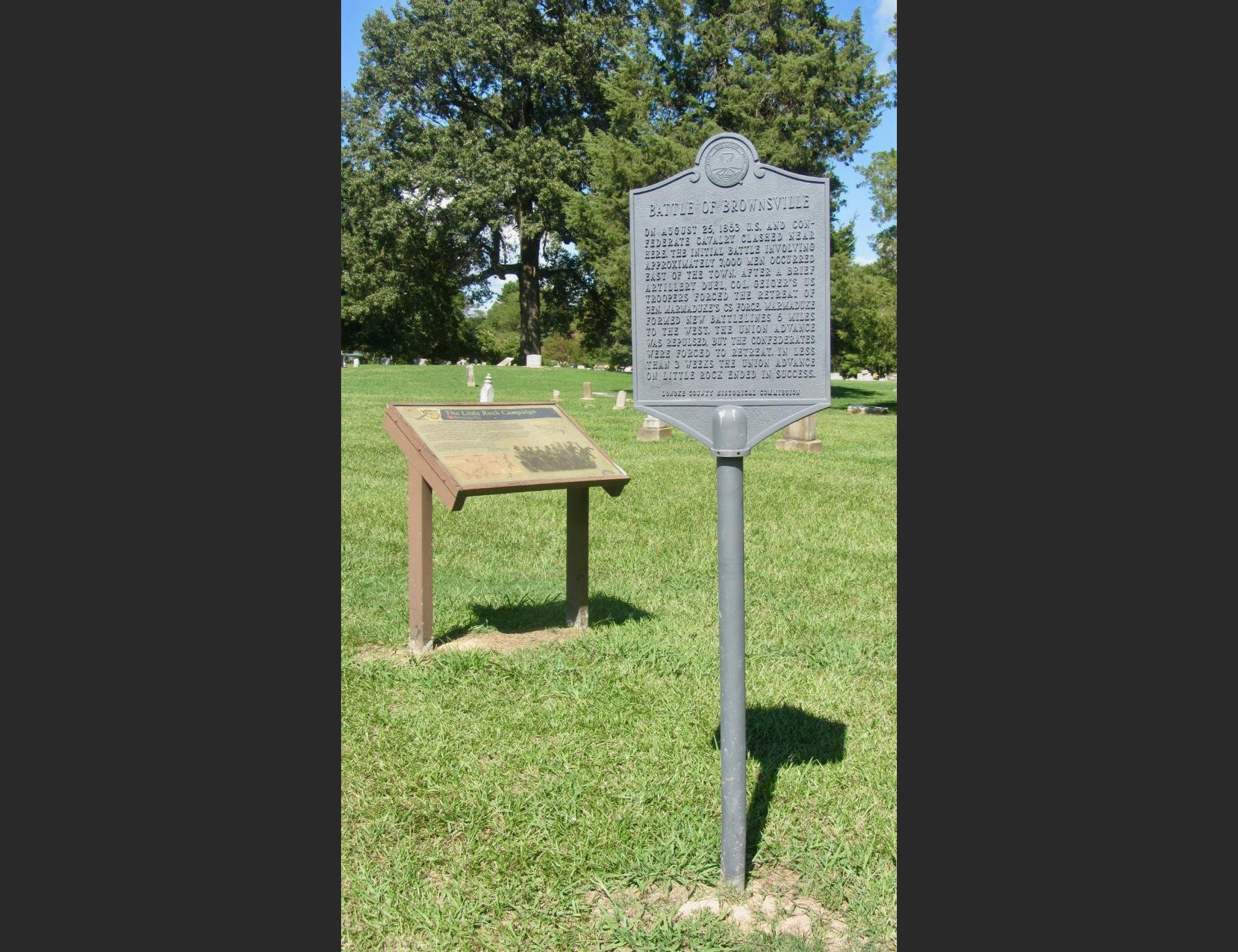 At today’s Brownsville Cemetery, Confederate troops retreated after stiff resistance. (Special to the Democrat-Gazette/Marcia Schnedler)
The ferocity of the day’s combat is suggested by a comment from Confederate Maj. John Newton Edwards posted at the location:

“The enemy charged down the road in splendid style, as if to save the bridge, but it would have been better had more of them not been born. The dense cloud of smoke from the crackling, burning bridge, like sorrow’s veil, hung between them and Bledsoe’s battery. When the head of their long lines had nearly reached the bridge, these noble old guns sent shell and shot, winged with fury, screaming and hissing up their lines, scattering the mangled fragments of men and horses like chaff before the wind.”

An added attraction at Reed’s Bridge is a replica ensemble of a half-dozen farm buildings from the Civil War era. A sign gives the prices back then for crossing Bayou Meto on the local ferry. Fees started at 3 cents for a pedestrian and topped out at 50 cents for a wagon with four wheels being pulled by more than two horses, mules or oxen.

Other stops include Brownsville Cemetery, off Arkansas 131 north of the I-40 exit to Lonoke. A marker explains that on Aug. 25, 1863, outnumbered Confederate troops commanded by Marmaduke fell back after stiff resistance against Union soldiers under Brig. Gen. John W. Davidson. 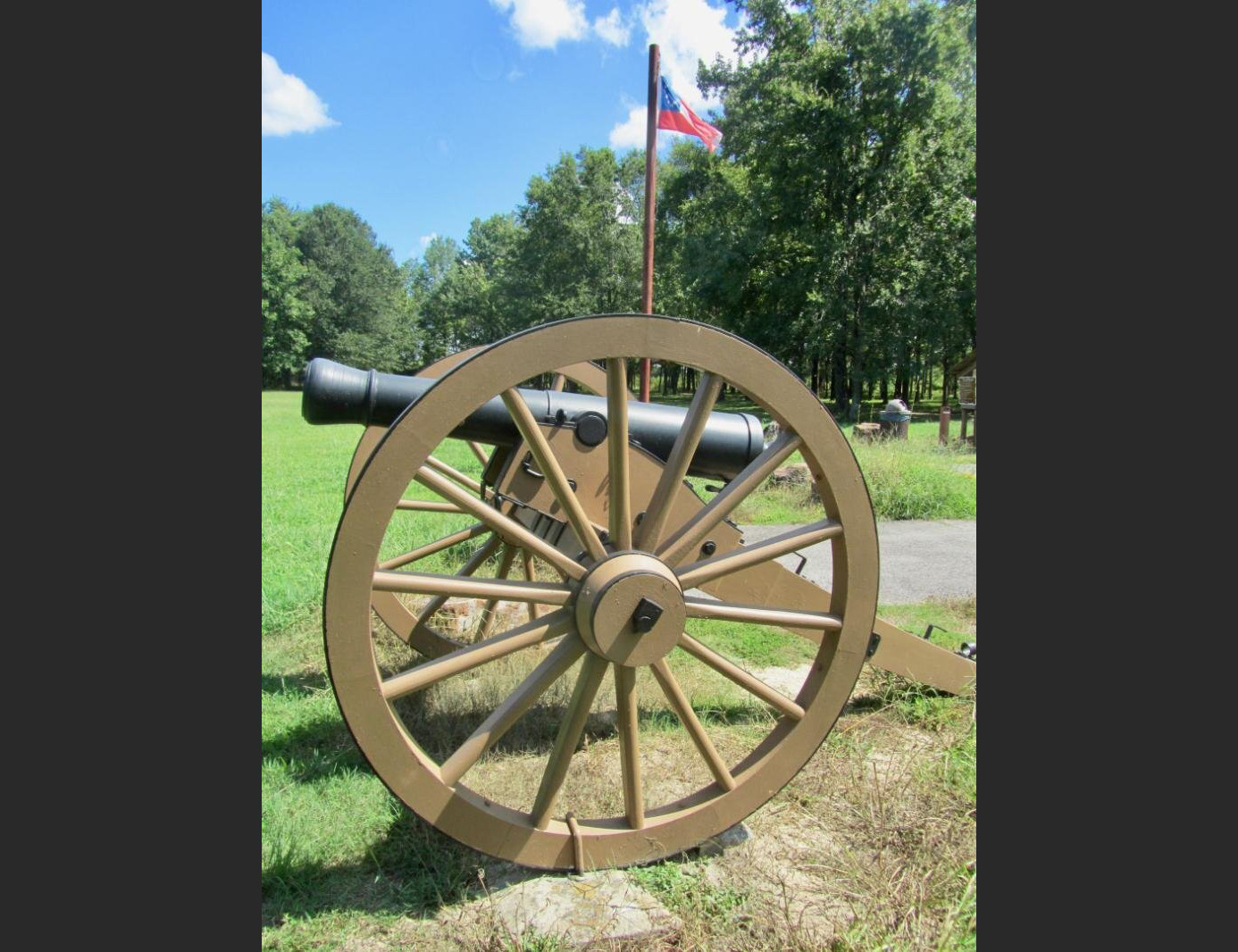 A Civil War cannon replica is located at the Reed’s Bridge battle site. (Special to the Democrat-Gazette/Marcia Schnedler)
Another trail location overlooks the boomerang shape of Willow Beach Lake. The marker pictures a wooden pontoon bridge built by Northern soldiers to prepare for capturing Little Rock.

Inside Little Rock’s eastern boundary, a location in Pratt Cates Remmel Park, 5301 Lindsey Road, is labeled “The Battle Before the Fall of Little Rock.” At the intersection of Fourche Dam Pike and East Roosevelt Road just east of Bill and Hillary Clinton National Airport, a granite marker notes: “In this vicinity of Sept. 10, 1863, an invading Federal column under Gen. Frederick Steele defeated Confederate forces under Gen. John Marmaduke.”

The end of the victorious Union campaign on Sept. 11, 1863, is denoted by two signs in Little Rock’s Riverfront Park. One quotes Union Pvt. A.F. Sperry of the 33rd Iowa Infantry: “That hour of our arrival was one of the most stirring and poetic of our military life.”

An obverse sentiment is a comment from Lt. William W. Garner of the Confederate Newton’s Regiment: “I am not discouraged, for I do think we will gain our independence sooner or later. But I acknowledge that I have never until the fall of Little Rock felt the sting of being an exile.”

LITTLE ROCK -- A group of architects has been selected to jointly spearhead the upcoming remodeling of the Central Arkansas Library System's Main Library in downtown Little Rock.Witsell Evans Rasco, Polk Stanley Wilcox and Mark Mann of Stocks Mann Architects will oversee the redesign.According to a written report that Central...

Two winless high school football teams looked like winners for 48 minutes.The Central Arkansas Christian Mustangs walked from Little Rock's Scott Field on Friday night with a 21-19 victory over the Little Rock Hall Warriors, but their 4A-4 Conference win was hard earned and in jeopardy to the end."Hall never...