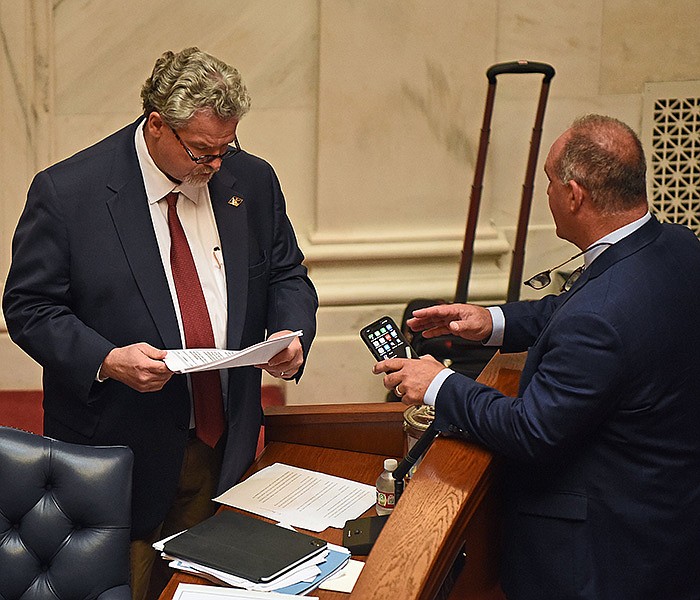 Sen. Alan Clark (left) talks with Senate President Pro Tempore Jimmy Hickey before the start of the Senate session Friday at the State Capitol. After the Senate recessed, Hickey said he doesn’t know when he will reconvene for consideration of the punishment recommended for Clark. (Arkansas Democrat-Gazette/Staci Vandagriff)

Clark said he disagreed with the committee’s findings that his ethics charges against Flowers were spurious, frivolous and retaliatory.

Sen. Jonathan Dismang, R-Searcy, told senators he made a motion for the Senate to recess in order give Clark more time to prepare his defense because Clark and others have indicated Clark didn’t have adequate time to get prepared for Friday’s Senate meeting. He said some senators had other obligations for early Friday evening.

Eight days ago, the Senate Ethics Committee voted to approve its findings and recommendations.

But Clark told senators “I want to get this over with. I don’t care if you vote not to hear anything I have to say, because do whatever you are going to do.” He voted against Dismang’s motion.

Afterward, Senate President Pro Tempore Jimmy Hickey, R-Texarkana, said he doesn’t know when he will reconvene the Senate to resume consideration of the ethics committee’s findings and recommendations for punishment against Clark.

“I want to look at everything,” Hickey said. “It is always my intent to try to make it whenever I know most members are down here for committee meetings.”

On Aug. 18, Clark filed an ethics complaint against Flowers alleging she violated the Senate’s code of ethics by accepting legislative per diem payments for participating by Zoom in the Senate’s regular session meetings in 2021.

The Senate Ethics Committee said in its report to the Senate that Flowers contacted the Senate staff as soon as she became aware in the 2021 regular session of the deposits in her bank account that she felt had been made in error, and she was assured by Senate staff she was entitled to the payments she received.

The ethics committee said it’s the committee’s belief and determination that “clerical errors occurred” in dealing with the unprecedented circumstances of conducting a legislative session during the covid-19 pandemic, which included wholly new procedures and scenarios such as remote participation by senators.

“While regrettable, the clerical errors were understandable and resulted in the unintentional overpayments of reimbursements to senators, including Senator Flowers,” the committee said.

Last month, Hickey said he learned from the Senate staff as a result of Clark’s inquiries about legislative expense reimbursements to Flowers that Garner and Flowers, who participated in the Senate’s meetings through Zoom during the 2021 regular session, were each incorrectly paid per diem.

“I personally looked at it as a clerical error,” Hickey said five weeks ago when asked why he didn’t file an ethics complaint against Flowers.

In a check dated Sept. 1, Garner reimbursed the Senate $906, according to Senate records. “Zoom” was written on the check.

Flowers is an attorney. Clark is a businessman. They have clashed at times in the Senate.

In its report to the Senate, the Senate Ethics Committee said Clark’s allegations against Flowers did not have merit, Clark made repeated public statements regarding his intent to retaliate against the Senate, and Clark’s investigation of the facts before filing his ethics complaint against Flowers was reckless with deliberate intent.

The evidence demonstrates Clark singled out Flowers for an ethics complaint and his stated reason for filing his complaint was “untrue,” the committee said.

The committee said “the only purpose to the filing of the [complaint] and any that he has plans to file going forward, seems to be to fulfill his promise on July 3 to ‘burn the house down.'”

The committee also recommended the Senate punish Clark by suspending him for the remainder of the 93rd General Assembly, including the loss of reimbursement for conference registration fees or travel reimbursements related to in-state or out-of-state travel; attendance and participation at legislative committee meetings or Senate meetings, with the exception of any Senate organizational or Senate orientation meetings for the 94th General Assembly, including access to the member and staff only areas of committee rooms and facilities; and access to and use of the Senate, the Bureau of Legislative Research, Legislative Audit and other legislative facilities, equipment or staff resources, including his Senate email account.

Clark is running unopposed for his District 7 seat.

On June 15, Hickey filed an an ethics complaint against Sen. Mark Johnson, R-Ferndale, for Johnson signing in Clark’s name on the sign-in sheet for reimbursement at the Senate Boys State committee meeting June 3 that Clark didn’t attend. He also filed a complaint against Clark for asking Johnson to seek reimbursement from public funds for Clark for that meeting. The Senate didn’t pay the $155 per diem to Clark for that meeting at the behest of Senate leaders.

For violating the ethics rule, the Senate’s punishment for Clark on July 21 was to strip him of his committee chairman and vice chairman posts and block his eligibility for per diem and mileage reimbursement for the rest of this year. He also was reprimanded by the Senate, and future Senate president pro tempores are not to consider Clark for appointment to serve on Boys State, Girls State or the Senate Ethics Committee. 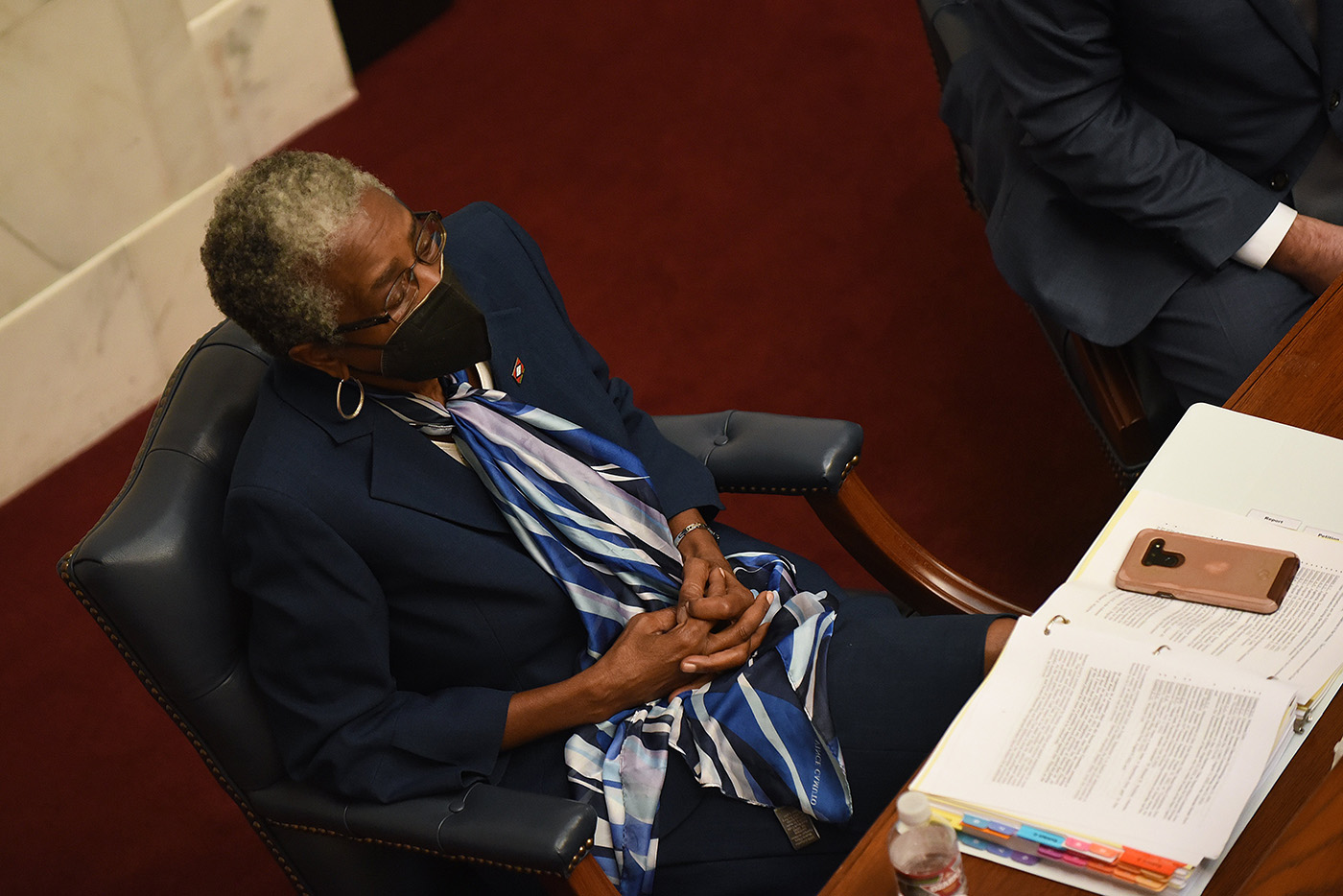 Sen. Stephanie Flowers sits in the Senate chamber on Friday. Flowers and Sen. Alan Clark joined 27 other senators in voting to find that she didn’t violate Senate rules as Clark had charged. Flowers declined to give a closing statement during the session. (Arkansas Democrat-Gazette/Staci Vandagriff)

By Jeff Halpern | Photos by Tommy Land LITTLE ROCK — The Little Rock Catholic Rockets pitched a shutout in the second half in a 37-16 victory over West Memphis. The ninth-ranked Rockets (5-0, 4-0 6A-East Conference) outscored the Blue Devils (4-1, 3-1) 23-0 by holding West Memphis to 2 first downs...

SEARCY, Ark. — A family calling for help in Searcy 28 years to the day after their loved one, Jarrod Green went missing in the small town. Green’s death is still being investigated as a homicide, and no remains have ever been recovered. Friday was the first time Jarrod’s mother...